83% of Germans Unhappy With Immigration, Merkel Tells Them To Go Fuck Themselves 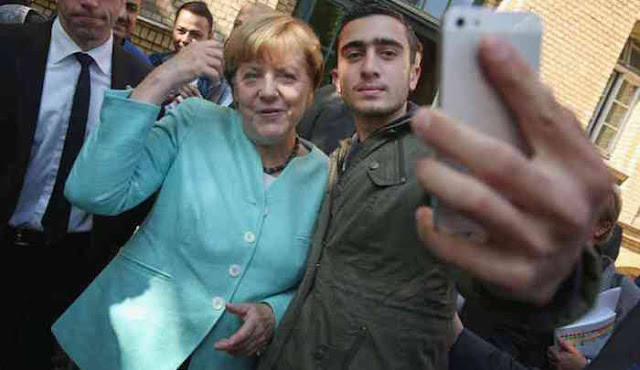 Time for the old scrunt to go.

You can't lead without folowers:

They are calling for her resignation over open door immigration policy

Three of the attackers were among 1.1million who entered as refugees

Three of the four attackers were asylum seekers, and two of the assaults were claimed by the Islamic State group.

'Merkel must go' has been trending on social media, with people posting powerful pictures including one claiming that she has blood on her hands after recent attacks.

The picture shows her splattered with blood, while another depicts her wearing a Burka.

A new survey found that 83 per cent of Germans see immigration as their nation's biggest challenge - twice as many as a year ago.

Now it suddenly becomes very clear what happens to your gray matter when it has been indoctrinated in communism from birth. No more would Obama forsake his Chicago ghetto than Meekel stop singing the Internatinale.

Wait, aren't they Parliamentary? No? I guess not.

String her up then.