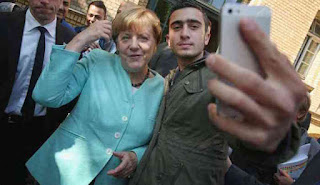 Angela Burkal's Got a Fever,
And the Only Prescription Is More Muslims

AP:
2:25 a.m.
Munich police chief Hubertus Andraes says the suspect in the Munich shooting is an 18-year-old German-Iranian from Munich.
Andraes said at a news conference that the attacker's motive was still "fully unclear."
Andraes said that the body of the shooter found about 2 1/2 hours after the attack was determined to be the shooter based on the evaluation of witness statements and closed circuit television.

Two others who fled the area quickly were investigated but had "nothing to do with the incident"
---
1:40 a.m.
Munich police spokesman Peter Beck says 10 people were killed, including the likely attacker, in the shooting in the Bavarian capital.

Beck says investigators also believe the shooter killed himself and appears to have acted alone.
Munich police gave a "cautious all clear" early Saturday morning, more than seven hours after a gunman opened fire in a crowded shopping mall and at a nearby McDonalds.

AND THEN THERE'S THIS:
Vlad has an informative translated post from a German Q&A police conference with media:UPDATED: Munich attacker was 18 year old German with Iranian backgroundwhich reveals the following interesting points:question: (??) how Long?answer: in this first Phase we can only confirm it started at 5:15, and at 8:30 the officers found the suspect deadquestion: so the “Long weapons” was not factual?answer: we did not find anything like thatquestion: the backpack?answer: we did find a backpackquestion: weapons insde?answer: no weapons found insidea weapon can be reloaded. we will search the crime Scene and then know how often he shotquestion: what about the FB Posts where a, supposedly fake, Young woman asks Young People to come to mc Donalds at 4 o clock cause she would give out stuff for freeanswer: it is part of the investigationquestion: (?)answer: we receied quite a few Video Uploads, we provide a dedicated upload. Videos and Pictures are helping us. especially to reconstruct the Course of Events. And we are questioning witnesses. But we understand that a few witnesses do not want to speak tonight, only tomorrow morning.answer continued: I estimate around 11:30 tomorrow we will give a new update ...

OH, AND BY THE WAY, THE MOTHERFUCKER STILL RETAINED IRANIAN CITIZENSHIP,

BUT HE WAS A "GERMAN-IRANIAN" ACCORDING TO THE AUTHORITIES.

1. Interesting that this is an Iranian. Would be even more interesting if he is a Shiite. They don't do individual jihad.

2. Seems like just as I predicted in the other thread, this has magically become a lone wolf case in a couple of hours.

Where did an eighteen year old Muslim in Germany come into possession of weapons?

Back when Orlando was spun as a "hate crime" against Muslims I merely noted to friends, "What will we call it when children are targeted?"

Children were targeted in Nice and now in Munich. Do we have stomach for "hate crimes" against children?

The reports were confusing and hard to follow. But when a witness stated the shooter shouted out "I am a German.... I hate foreigners" I knew we were dealing with a taunt. Case closed. Not a white supremacist.

We are in the attack-of-the-week phase. Only one presidential nominee seems to understand the concept of a simple three letter word.

Should read "hate crime by Muslims.

Nico,
The narrative must be preserved at all costs.

This is very interesting actually.

The whole thing doesn't sit well with me.

Iranian in most cases means Shiite. They don't go jihad on their own. ISIS is Sunni, they consider Shiite Islam an invention of Jews (lol). So that leaves Iran or hezbollah. What does Iran gain from this attack? Not much.

Did he recently come in contact with other Muslims who may have influenced him?

The fact that he yelled Allahu Akbar doesn't mean he's ISIS. That's just what any Muslim would yell when "at war".

Where did the narrative of him being against Turks start? Turkey and Iran are both trying to set themselves up as the leaders in the Middle East. Turkey on the Sunni side, Iran on the Shiite.

That the government would rule out ISIS without asking and answering any of the basic questions also points to a cover up planned well in advance. That they're also very quick to spin this as an anti migrant attack, rather than a jihad attack also goes along with Merkel's agenda where she is hell bent on crushing any criticism of terrorists and their sympathizers being imported into Germany.

Are there some kind of elections coming up in Germany?

My thoughts are all over the place and I'm writing it out as I am thinking about it. Sorry if it doesn't make much sense.

but this attack stinks to high heaven and we may have a false flag attack on our hands rather than a real terrorist attack.

You are not "all over the place" to me, as I am thinking along the same lines.

It is very hard to believe the government would stage a terrorist attack, but if they did, it does seem like they would be stupid enough to place a shooter on a roof who would argue his hatred for "Turks" and his German-ness, with another man, in a rant that sounded as if it was written for a B-movie.