How The Cultural Marxists Of The Frankfurt School Subverted American Education 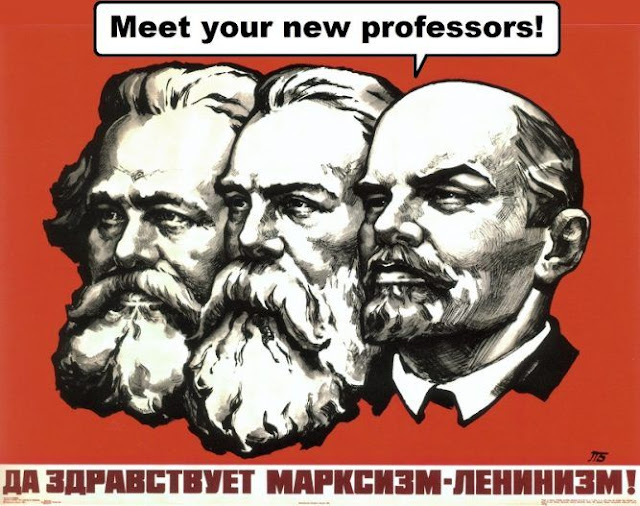 
Beau Albrecht: My father was a high-ranking SDS Poobah, and still thinks Castro is the bees' knees. Although this makes me technically a red diaper baby, I rejected all that baloney early on. These days, I write stories - mostly comedy science fiction - as well as maintain a blog mainly about dating advice, political commentary, and my writing projects.

From Return of Kings:

Perhaps you’ve wondered why so many college professors are so left-wing.  In your freshman year, you might have noted with dread—as I did—some of your fellow students “going with the flow” and molding their beliefs to fit in.  Perhaps one of them was you, before you grew up and snapped out of it!  The Frankfurt School is the answer to why so many universities are Social Justice Warrior factories.

The origins of the Frankfurt School

They began as a Communist think tank at the Goethe University Frankfurt.  They noted that the masses didn’t rise up during the First World War to overthrow capitalism; instead, the citizens fought for their countries.  Only Russia became Communist, a place they didn’t expect Communism to take hold.  Since they took the writings of Marx as gospel, all this was quite shocking.  They decided they needed to prepare the way bybreaking down traditional social ties—country, family, and religion—and afterwards the masses would embrace rule by a global Communist state.  That’s not working out too well lately, but all that’s another story.
They found themselves unwelcome in Germany during the 1930s, and one of the two reasons was that all of them were Communists.  They moved to the USA, settling down in Columbia University.  How did they repay the country that gave them refuge?  Bysubverting it, of course.  If all this sounds like McCarthyist alarmism, note that theCommunists themselves claim them.
Because the proletariat just wasn’t interested in revolution, they rebranded Communism, taking out the elements of class struggle, and adding contributions from Freudian theory.  This was a mistake; Communism emphasized hard work and heroism; that much is respectable even if the rest of the ideology is badly flawed.  If you compare theMotherland Calls statue to Trigglypuff, you’ll understand.

They had two strategies:  ensconcing themselves into academia, and the criticism of society (hence “critical theory”).  Ultimately, this meant ideological subversion and basically badgering society to death.  (It seems incredible that they did so much without picking up a single rifle.)  They stressed moral relativism and the “question everything” atmosphere that became the 1960s counterculture zeitgeist.  A few of their books, such asEros and Civilization by Herbert Marcuse and The Authoritarian Personality by Theodor Adorno, have become classics in academia.
Many of their students graduated and became professors elsewhere, just in time for the 1960s.  Young people are at the most impressionable time of their lives, so indoctrinating college students was a very effective strategy.  It’s little wonder that campuses became hotbeds of student activism!  College draft deferments surely helped them reach more students sympathetic to their message.
Further, the ideological seeds of the Frankfurt School—along with the Communist Party USA—fell onto fertile ground.  There were several groups that they—cultural Marxists and garden variety Communists—infiltrated and subverted, for instance:

Earlier I had assumed that the Frankfurt School was an independent movement, with no particular encouragement or guidance from the USSR.  Actually, it’s a little more complicated than that.  Franz Leopold Neumann, identified by the Venona decrypts as a Soviet spy, was in contact with leading figures Max Horkheimer, Theodor Adorno, and also the spy Hede Massing, the wife of Paul Massing (another Frankfurt school figure).  Later, he became a professor at Columbia University, where all his buddies were.  Does the picture look a little clearer now?
Here’s another gem I found.  KGB defector Yuri Bezmenov noted that only 15% of the KGB’s efforts were spying; the other 85% went into ideological subversion; this is what he was assigned to do in India, until he got disgusted with it and escaped.  He explained,

It’s a great brainwashing process, which goes very slow[ly] and is divided [into] four basic stages. The first one [is] demoralization; it takes from 15-20 years to demoralize a nation. Why that many years? Because this is the minimum number of years which [is required] to educate one generation of students in the country of your enemy, exposed to the ideology of the enemy. In other words, Marxist-Leninist ideology is being pumped into the soft heads of at least three generations of American students, without being challenged, or counter-balanced by the basic values of Americanism (American patriotism).
The result? The result you can see. Most of the people who graduated in the sixties (drop-outs or half-baked intellectuals) are now occupying the positions of power in the government, civil service, business, mass media, [and the] educational system. You are stuck with them. You cannot get rid of them. They are contaminated; they are programmed to think and react to certain stimuli in a certain pattern. You cannot change their mind[s], even if you expose them to authentic information, even if you prove that white is white and black is black, you still cannot change the basic perception and the logic of behavior. In other words, these people… the process of demoralization is complete and irreversible. To [rid] society of these people, you need another twenty or fifteen years to educate a new generation of patriotically-minded and common sense people, who would be acting in favor and in the interests of United States society.

Even though the Soviet Union fell apart twenty five years ago, the memes they launched are still out there.  Many of the students the Frankfurt School taught became teachers and professors, who taught another batch of teachers and professors, and they’re now indoctrinating our youth.  Some others became ensconced in the media or in government positions.  This is what Italian Communist theoretician Antonio Gramsci called “the long march through the institutions.” Only a fraction identifies with Communism, but they still practice the party line even if few are aware of where their views originated.
If you’ve ever wondered where all of today’s Social Justice Warriors came from, now you know the story.
Read More: How Cultural Marxists Distort Language To Achieve Their Goals
Posted by Pastorius at 7:05:00 pm