The song and performance that saved Duke Ellington's career at Newport 1956.

At the historic 1956 Newport Festival, Duke told Gonsalves to blow as long as he wanted during the interlude, which Ellington later called "The Wailing Interval" or "Blow By Blow."[citation needed] In what has since become jazz folklore, Gonsalves almost created a riot as he played a tenor sax solo for 27 choruses that aroused the normally seated crowd into a frenzy of dancing, standing on chairs, and rushing the stage. A woman with platinum blond hair in a black evening dress, named Elaine Anderson,[5] jumped from her box seat to start dancing, and she is often credited with initiating the crowd's ensuing uproar as Gonsalves continued his solo.[6] 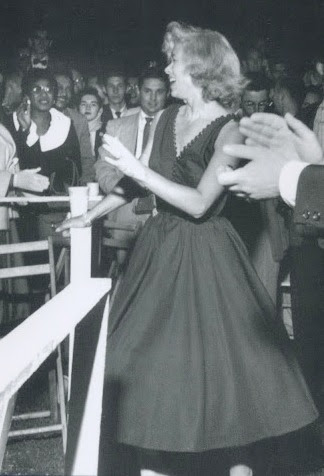 Why was his career in trouble? Because of the death of the Big Band?

Yup exactly. Big Band and swing were being muscled aside by bebop and free jazz. They were hanging on, but barely.

This was 1956 and Elvis had debuted "Heartbreak Hotel" in January. The young women went over to R&R in a near instantaneous swarm. Swing died faster than Disco and bebop and free jazz quickly followed.

Anybody gone to jazz show, of any kind, in my life time hasn't seen more than a few women his own age or younger. Ever. And when the girls leave it's all over.

I remember a George Duke Show from the early 80's. About 120 guys were there. And I mean guys, and only guys. Hey Nineteen? Forget it!

Well, it could be argued that the very attractive Elaine Anderson saved his career given the applause could just as well have been due to the crowd response to her lively participation.

Anon 1 you're absolutely correct about the rock n roll. But here in Reading there is a big jazz following, women included although they do tend to be at least in their early 30s. Berks County has a huge jazz festival every year.

Anon 2 no argument here each fed off the other although Gonsalves got it rolling initially.