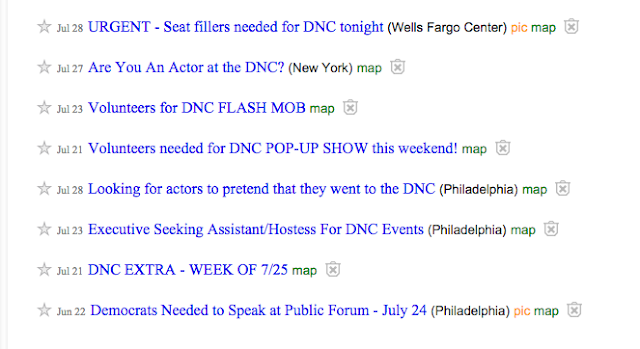 Paid seat fillers - DNC feign "unity"?....video illustrates how the DNC disenfranchises delegates by reserving seats held by Bernie's delegates and allowing non-credentialed individuals on the floor prior to admitting those with credentials. White noise machines have also been installed in the same areas as the reserved seats which encompasses nearly 50% of the venue. Amazing video.
Corroborating the above video ...
Philly Craigslist ads & another earlier report...Insiders report
Posted by Pastorius at 3:52:00 am

A fun photo-shop would include elements of this confetti being dropped by Hillary on images like this:
Hillary signs altered to state "LIAR" by covering up "H, I, half L, and Y". (clever!) ...by Bernie supporters wearing glow-in-the-dark T's stating "Enough is Enough!". What's interesting is that a few scans of the arena reveal that there are noticeable patches throughout the arena with those yellow shirts. DNC projecting "Unity"? LOL!
Kristinn Taylor has a post over at TheGatewayPundit titled "VIDEOS=> Boos Rain Down on Hillary at Start of Speech; Protesters Ejected From Convention" which illustrates with this image confirming sizable dissent.

Additionally, the Hillary camp had paid volunteers don yellow (not glow in the dark version) shirts try to drown out protest voices by chanting Hillary.

To characterize the DNC convention for Hillary as "staged" would be a tremendous understatement.