I'll show you how to fundamentally transform America, Jack

Oh sure Uncle Barry said he was going to do it and what he did was nearly destroy it instead.

Now we have a guy who is punching back and taking names. Unafraid and unintimidated. Who seems to honestly give a shit about the people who put him there. Who remembers who he works for.

The media is scared of him or wouldn't be working so hard to destroy him.

The Uniparty is scared of him or wouldn't be working so hard to destroy him.

Loyalists from the previous administration and within the intelligence community have the long knives out for him.

And when was the last time you saw crowds like this for a new sitting U.S. President who wasn't stumping for anyone?

Taking it straight to We The People 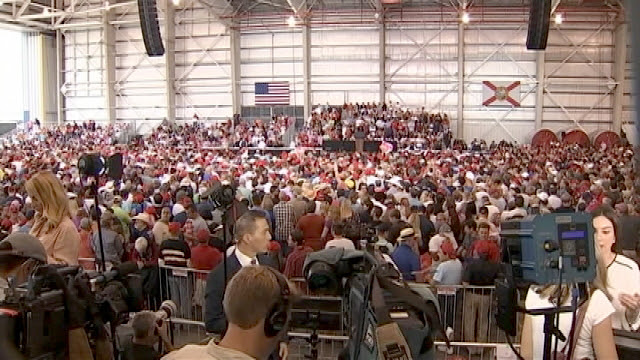 Opening for her husband, The First Lady, without treading anywhere near First Amendment issues, first had them bowing their heads then brought the house down.

Miles long line. No one pushing and shoving. No litter. No one pissing on the road.

And Melania read the Lord's Prayer!

It's heartening to witness what the actual temperament of average Americans really looks like.
Thank you President Trump!
************
OT
So they have to be taught what to protest about. What do you know? I knew they couldn’t think it up all by themselves.

Obama-linked activists have a ‘training manual’ for protesting Trump
http://nypost.com/2017/02/18/obama-linked-activists-have-a-training-manual-for-protesting-trump/

Other agencies on the budget office’s list of cuts include the Overseas Private Investment Corporation and the Corporation for National and Community Service, which finances programs run by AmeriCorps and SeniorCorps. The memo also proposed reducing funding for the Neighborhood Reinvestment Corporation, a nonprofit organization focused on urban development.

Change A Comin’……………………a good sign….
https://www.washingtonpost.com/politics/memos-signed-by-dhs-secretary-describe-sweeping-new-guidelines-for-deporting-illegal-immigrants/2017/02/18/7538c072-f62c-11e6-8d72-263470bf0401_story.html?utm_term=.134f0e7f587d
A friend of mine who is a property leasing in Houston tells me this; downtown high rise building has the DOJ Immigration Court as one of their primary tenants…..they are now expanding their space in anticipation of more deportation proceedings……looking to at least double in size, ramping up for the new Trump directives……

Trump’s former head of the EPA transition, Myron Ebell, told media outlets that the administration is looking to cut the agency’s staff by two-thirds, dropping from 15,000 to 5,000 employees.

GatesofVienna: Culture-Enrichment With Baseball Bats Comes to Rural Germany
On the night of January 28th a German farming family's son held a carefree party for about fifty participants who gathered in a party tent in the yard of the farmhouse in rural Münsterland. After a few hours, uninvited guests showed up. “There were about ten young men, between 18 and 25 years old, with dark hair and darkish skin, speaking German with an accent arrived via three limousines, two Mercedes and a BMW creating a standoff and forced to leave. The foreign visitors made good on their promise to “come back tonight” smashing of windows at 3:30am shook the farmer’s sleeping family out of their beds. They had demolished the front door and smashed the windows of the farmhouse.
*****
the following is a comment posted to this thread:


This happens every night in Melbourne as our left wing socialist government won’t hold them after arrest. Baseball bats had sold out in the western suburbs. They always arrive after midnight, they 4-5 come in a stolen car (BMW, Mercedes etc), they smash in the door and threaten the householder and demand car keys and drive off in the car(s), then move to the next house until they all have a stolen car . They do this about 4 times a night until each one has a stolen car. They drive off to their “homes”. The police find some cars, some criminals, arrest them then let them go as no one is held. Some Victims are assaulted, the elderly are most vulnerable and have been beaten in their beds by invaders. It is a big mistake for people to buy an expensive car as it attracts them like bees to honey. They also hijack cars on the road. They surround a car on the freeway and block them in and force them to slow down. They often “bump” the victims car so they get out to check damage and exchange detail as required by law. The gangs attack them with hammer and steal their car. Only the HeraldSun reports the violence, ABC (Australian Brainwashing Corporation is silent), 3AW allows people to ring up and tell their sad stories every day. However, now people are not ringing as much as they know how bad it is and what is the point of everyone ringing every day to report “my house has been smashed in, I have been assaulted, my family threatened, my car etc stolen…” day after day after day. You still have a nice place if it is still “news” to report this. Here in Melbourne we are overwhelmed with African gangs.