NYT: The intelligence agencies then sought to learn whether the Trump campaign was colluding with the Russians to influence the election... The officials interviewed said they had seen no evidence of such cooperation. 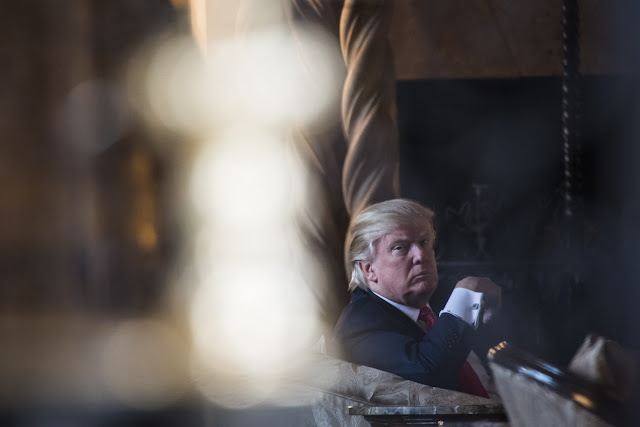 "Go Get The Butter"


Faceless bureaucrats in the intelligence and law enforcement community seek to take down the Trump administration on some pretext relating to Russia. That is my takeaway from the New York Times story “Trump Campaign Aides Had Repeated Contacts With Russian Intelligence” by Michael Schmidt, Mark Mazzetti and Matt Apuzzo. The Times story appears to be an extension of the covert campaign waged to cashier Michael Flynn noted by Eli Lake (Bloomberg), Damon Linker (The Week) and John Podhoretz (New York Post).
The big Times story is linked by Drudge and full of incriminating innuendo. It is the innuendo that strikes me most forcibly as I read the story. Joel Pollak comments specifically on the story here.
If you want to understand what is happening and what is coming down the road, the story is (unfortunately) required reading. Here are the bullet points that Mike Allen extracts from it in his Axios AM summary this morning:
• “Phone records and intercepted calls show that members of … Trump’s … campaign and other Trump associates had repeated contacts with senior Russian intelligence officials in the year before the election.”
• “American law enforcement and intelligence agencies intercepted the communications around the same time they were discovering” that Russia was hacking the DNC.
• “[T]he intercepts alarmed American intelligence and law enforcement agencies, in part because of the amount of contact that was occurring while Mr. Trump was speaking glowingly about the Russian president.”
Allen misses this slight qualification of the innuendo: “The intelligence agencies then sought to learn whether the Trump campaign was colluding with the Russians on the hacking or other efforts to influence the election. The officials interviewed in recent weeks said that, so far, they had seen no evidence of such cooperation.”
And this one: “The officials would not disclose many details, including what was discussed on the calls, the identity of the Russian intelligence officials who participated, and how many of Mr. Trump’s advisers were talking to the Russians. It is also unclear whether the conversations had anything to do with Mr. Trump himself.”
Even putting the innuendo to one side, the story’s three reporters are what literary critics call unreliable narrators. Here is their description of Trump’s sarcastic comment at the press conference late this past July in the course of the campaign (video below): “At one point last summer, Mr. Trump said at a campaign event that he hoped Russian intelligence services had stolen Hillary Clinton’s emails and would make them public.” That is a lie, not to put too fine a point on it.
Posted by Pastorius at 12:06:00 am

Breaking news: The FBI is not expected to "file charges" against Flynn.

Are the agencies dealing with meta data, known text, or meta data and encrypted information?

General Flynn, as Director of the DIA, certainly had global contacts long before he joined the Trump administration. Those contacts would have included intelligence chiefs of other international intelligence agencies.

Contact can be benign, efficient, and merely about business and channels of communication.

CNN is treating the case like we have a Russian mole in the WH. Silly asses.

TLEP,
CNN is treating the case like we have a Russian mole in the WH. Silly asses.

We who don't go to CNN to get our news must understand that many Americans do go to CNN and, worse, trust CNN.

We need to "convert" these CNN devotees. But how?

In a media-driven society, one ought not be surprised the media outlets would recognize that there is market share to be had in being the network that feeds a constant stream of anti-establishment conspiracy theories.

That's what CNN is.

It is in financial trouble, and it has decided it's best hope is to double down on the crazy.

But like AOW said, we must recognize many Americans do rely on CNN.

It's not only CNN.

It's also what's being said throughout academia: middle school through graduate level.

The mainstream media and academia are busy creating pod people. Don't believe me? Check with your adult children after they've attended one year of college -- or even one year of high school.

BTW, I'm typing this in as I'm watching "Morning Joe" on MSNBC. Amazing and dismaying to watch.