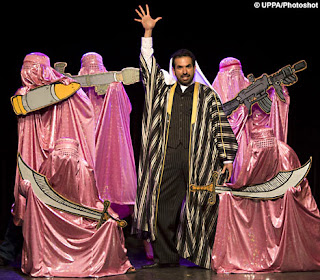 Last night (on Christmas, for God's sake) an effeminate Jihadi named Shahid 72 stopped by and left the following comment:

This is a total disgrace!! Do I need to remind you what happened the last time you infidels defaced the prophet Mohammed? May the wrath of Allah shower upon you true justice!

Which only goes to prove that even gay Jihadis have no sense of humor.
Well, all's well that ends well, because Shahid's (Shahid means martyr) name predicts his death, so we know we won't have to put up with his homo ass for much longer.
Until Shahid does blow himself up, I would suggest everyone avoid crowded men's restrooms.
Posted by Pastorius at 3:59:00 pm

Is this a wind up?

Watcher,
What do you mean by a "wind up"?

No, I think the guy was a joke. But, I might as well make fun of gay Jihadis anyway.