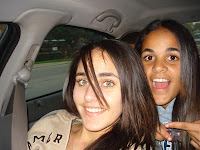 The story of the murders of Amina and Sarah Said in the greater Dallas-Texas area is still developing. Are the murders of these girls "honor killings"? Early reports seem to indicate so. From the Chesler Chronicles, on January 3, 2007:

Just yesterday, an Egyptian Arab Muslim father in Dallas, Texas allegedly shot his two beautiful teenage daughters to death because he disapproved of their American-style ways. Their names were Amina and Sarah Said and their father’s name was Abdul Said. The girls looked sassy and full of life; they looked like Dallas teenagers. They were 17 and 18 years old and their friends considered them “geniuses.” Abdul was a taxi driver. (In parts of Europe, taxi drivers are known to aid and abet honor murders).

Perhaps how Amina and Sarah dressed, and how they thought, shamed their father Abdul. He was no longer in control of his women—a mark of shame which provoked his need to kill them. Perhaps their flowering sexuality enraged him because it made him desire them—and from this he concluded that other men might desire them too and if he could not have them, no man could.

The blogs and the local Texas media (the Dallas Morning News) were all over this. Hot Air, Atlas Shrugs, Jihad Watch, were too. The only national coverage of this story was contained in the Washington Times. SEE HERE Why did the national and international media so far shy clear of this story? Perhaps they chose to dig deeper first or maybe they were waiting for an arrest to be made. But one also wonders: Were they afraid of being accused of “Islamophobia” if they reported the truth? Did they not want to use the word “Arab” or “Muslim” lest they be attacked as “racists”?...

I believe the national media will continue to ignore this story no matter how much evidence is put forward. They will do so because this is the kind of story which would teach people the real truth about Islam and thus lead to "racism."

The scum did it in Texas so I hope they give him the death penalty.

Pastorius,
I think you're right.

Today FNC used ISNA to debunk that the murders of these girls could be related to Islam. ISNA!

Damn, I gotta wonder who the hell these media experts consult before airing the views of organizations such as ISNA.

Brgotn,
Maybe a posse can hunt him down?

But there IS quite a discussion about these murders going on over at my site.

I've posted some additional references in comments to my post over there.

Excuse me...but shouldn't you folks be calling Joe? ISNA, CAIR and the others consider him to be public enemy No.1 .....and for good reason.

IN ISLAM IT IS FORBIDDEN FOR A MUSLIM WOMAN OR GIRL TO MARRY A NON MUSLIM MAN.

sooooo I don't want to hear anymore that this is not an Islamic problem. Not one muslim in this world can argue what I just said!

Eventually, not one Infidel in America will argue with me that we ought to kill every last man who thinks like you.

Pastorius,
if you are reffering to me pointing out that this is infact a problem stemming directly from islam, why would every infidel want to kill me.

Read carefully please, im on your side.

In my opinion, Sharia is sedition and it ought to be punished by the death penalty or deportation to a Muslim country of the idiot's choice.

Case 1: It is a case of man jealousy of woman.

Case 2: Honour is really Pride. Man is too proud to "let his progeny" "blend" in with Gentiles nations.

Case 3: Extreme evil. Watch out the Devil whom we call Satan that force for no good within us!