How Islam Invades the UK From Cradle To The Grave 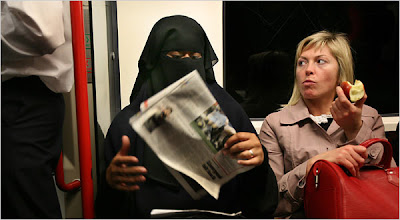 Gandalf at Up Pompeii enumerates all the ways Islam has insinuated itself into British life, from birth to death:

Britains population to grow by nearly 50 million people by 2050. The overall UK average is 1.84 babies. The average for British-born women is 1.6 and for foreign-born women 2.2.The highest birthrate in the UK is among Pakistani-born women, who have an average of 4.7 children each. Last year, 22 per cent of births in the UK were to foreign-born women. You will soon be a minority in your own country and muslims are well on their way to becoming a majority. Plus you will be subsidizing your own descent into minority status as the British goverment decided that you as a taxpayer must pay for a muslim man, his four wives, and their flock of children. Yes, polygamy is OK (only for muslims) in the UK.

You may not even be born in a UK hospital as the high birth rate has caused hospital maternity wards to overfill and women in labour are being turned away.

As an infant you may receive less care and as a student you may receive less attention as personnel try to deal with the plethora of babies born with severe disabilites due to the penchant for arranged muslim marriages to first cousins most frequently found in muslims from Pakistan. Of course as you mature into a taxpayer - you will be paying for such "cultural Islamophobia"  --- "But the experience of researchers at Bradford Teaching Hospital... which serves a community with a large Pakistani population, reports an unusually high rate of inherited gene disorders. Researchers estimate the rate of birth defects is 10 times higher than in the general population, spokeswoman Leanne Wilson said in a statement.High rates of deafness, degenerative nerve disorders and children born with small heads and learning disabilities have been found, she said. The statement said marriage patterns among Pakistanis are “likely to be a major factor” in the rate."

You may be turned away from you local swimming pool because you are not a muslim.

Or you may have to lead your crying two yr. old little girl away from enjoying swimming lessons - because SHE isn't muslim. Try explaining that to a 2 yr. old.

Or maybe the swimming pool staff will allow you to go into YOUR local pool - but first you must adhere to muslim rules for swim clothes - If you're a man: "Non-Muslims may swim during this time but only if they follow the strict dress code of swimming shorts that hide the navel and extend below the knee." ----If you are a woman - forget it you are forced to attend women only sessions with muslim women.

If you find yourself sick and in need of being in hospital - you can be sure that you will have plenty of time to wait around for nursing care - as the nurses will be busy turning beds so muslims can face Mecca at prayer time.

While thousands of British people wait for needed surgeries & other hospital procedures, including wounded veterans of the wars in Afghanistan and Iraq, the NHS has decided replacing muslim womens' virginity is ahigher priority - and YOU get to pay for this "re-veiling".

So - you're now out of the hospital but still too sick to go to your local pub (if it still exists) so you send your partner to a Tesco Express to buy some beer. You both find out that particular Tesco is unable to sell beer because the Borough Council received muslims signed petitions demanding the council deny the alcoholic license to Tescos --muslims say they find the idea of alcohol being sold offensive.  It's coming! See also  - THINGS THAT OFFEND MUSLIMS


The number of instances I could cite in the "life" category are endless and encompass food, work, leisure, etc. - so to conserve space let's go forward to.........Death.

Let's say your untimely death takes place during the early week. Your grieving relatives want to have your body buried on a Saturday in the city where (you and) they live. A simple, reasonable request that would allow time for them to make arrangements and for relatives to travel to the funeral from their out of town locations. "But when the funeral director called City Road Cemetery to arrange a memorial service in the chapel followed by burial, he was told the funeral would not be allowed on a Saturday - because the family was not Muslim. The dhimmi Sheffield Council confirmed it does not offer funerals at the weekend except to Muslims, in line with the rules of the Islamic faith that the dead must be buried as soon as possible." THUS NO SATURDAY BURIAL BECAUSE YOU AND YOUR FAMILY ARE NOT MUSLIM!!!

If you are a Christian or a member of any non-muslim faith - or atheist - you will find that in Bullwell cemetary your body will be buried, facing mecca, according to Islamic rules. "But all headstones at the new £2.5m High Wood Cemetery in Bulwell will be plotted to face north-east, in line with Islamic faith." The dhimmis in charge of the cemetary decided (for you) that your faith means less to you than the Religion of Peace means to muslims - so muslims must be appeased. Oh! you can get a stone facing a different direction but only upon a "special request".

The material in this piece is valuable and should be built upon - perhaps as a separate growing list of infiltrations.

** undermining the battle to rid Britain’s hospitals of killer infections by refusing to wash their hands when visiting sick relatives.

** Muslim medical students are refusing to attend lectures or answer exam questions on alcohol-related or sexually transmitted diseases because they claim it offends their religious beliefs.

** Muslim medical staff have objected to hospital hygiene rules because of religious beliefs.


Below in an earlier post, someone posted a link to a BBC article claiming Sharia is the basis for English Common Law.

There is one question that has been bothering me as no one yet seems to have explored the subject of inbreeding.

With muslim inbreeding being common for so long, why hasn't that alone destroyed islam? how many generations would it take (not including converts)for islam to succumb to the inevitable conclusion of inbreeding(sterility, etc)?

Would that be another factor as to why muslims particularly nowadays are determined to take over the world (genetic diversity via "war booty" and "forced reverts")?

War booty may be one reason Islam has not destroyed itself.

On the other hand, the effects of inbreeding among the Muslim population may show themselves in the lower average IQ of the Muslim countries.

I think that WE should refuse to give them any vaccine or medical treatment that was not invented by a muslim (as a sign of disrespect, I never capitalize either muslim or islam) so as not to offend them. If I hated da Joos I would refuse to put any of their polluted demon medicine in my body anyway.
I've got some camel urine for sale.

Between this post and the current economic crap, I'm about ready to do a 1 1/2 gainer off the top of a tall building.