Help Obama's Half-Brother Move Out of His Hut 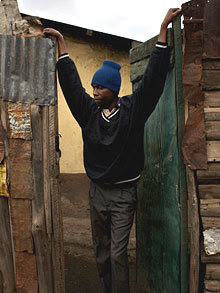 The biggest scandal of the election campaign is going unreported, for the most part, by the mainstream newspapers and TV shows. Imagine if John McCain or Sarah Palin had a half-brother who was living in a hut. Imagine if McCain, a multimillionaire, did nothing to help the guy. Imagine if McCain came to the convention and spoke incessantly about compassion and how he was inspired by the biblical mandate: we are our brothers' keepers! This would be the lead story on the evening news.
So why aren't the networks covering the fact that Barack Obama's half-brother George lives in a 6 by 10 foot hut in the slums of Kenya? It took a reporter for the Italian edition of Vanity Fair to locate George Obama.
Obama noted that when he met his famous half-brother in 2006 “we spoke for just a few minutes. It was like meeting a complete stranger.”
George Obama also told the magazine that “I live here on less than a dollar month,” and “if anyone says something about my surname, I say we are not related. I am ashamed.”
Obama has done absolutely nothing to help his unfortunate half-brother.
Apparently alarmed that this report could hurt Obama, CNN dispatched one of its reporters to do cover-up work for the Obama campaign. This is a hopeless enterprise; anyone who sees pictures of George Obama's dwelling place on the web knows that they reveal the worst images of African poverty. Moreover, for all its propagandistic intent, the CNN report is unintentionally damaging to Obama. The reporter cannot hide the fact that George Obama comes from a "ramshackled slum." A neighbor tells CNN that Barack Obama really should connect with his half-brother and "see how he's living" and do what he can to "improve our way of life."
CNN attempts to portray George Obama as a self-reliant fellow who doesn't want any help. The network quotes him saying, "I was brought up well. I live well even now." George, however, speaks in a halting voice; he is trying to maintain his self-image. George also says, "I'm Kenyan...I would love to live in Kenya." Presumably George gave this answer to a question asking whether he'd like to move to the United States with Barack Obama's help. These answers, however, in no way suggest that George doesn't want Barack Obama's intervention to relieve his grinding poverty. A man's effort to maintain his dignity should not be exploited to pretend that he doesn't want a helping hand.
When I posted on my AOL blog about George Obama last week, the Obama apologists could do no better than to say that Barack Obama doesn't owe his half-brother anything. But sibling assistance is not a matter of debt. Rather, it is a matter of family values and compassion. Obama has cited as his favorite Bible verse Jesus's statement: whatever you do to the least of my brothers, that you do unto me. It seems that the Republican allegation that this man is full of pretense and empty words--in other words, a modern-day Pharisee--is more than justified.
Obama may not want to help his 26 year old half-brother, but that doesn't mean we shouldn't.
I'm starting the George Obama Compassion Fund which has the goal of raising some money to help George Obama move out of his one-room hut. George also wants to become a mechanic and surely he could use some funds to get the training he needs to fulfill his humble aspirations. Currently George lives on a few dollars a month. Even a few thousand dollars would completely transform this man's life.
I'm putting up $1000 to get this fund started. I invite people to send me small contributions--$5, $10, $25, whatever you can spare. Send them to P.O. Box 3384, Rancho Santa Fe, CA 92067. Make your checks to "George Obama." I will then contact the Obama campaign and offer them the money on the condition that they forward it to George Obama in Kenya. The advantage of this approach is that not only does George Obama benefit from our generosity, but also Barack Obama can use the opportunity to improve his relationship with his half-brother. Let's foster Obama family values, and give a break to a guy who really needs it.
Posted by Pastorius at 3:34:00 pm

Wasn't it Obama himself who stated:
"I am my brother's keeper?"

Let's fly this guy to the US and let him tell his story at a McCain rally.

We could at least bring the guy over here and get him a job and an apartment, or something.

We don't even know this guy well; yet, here we are, all rushing to donate money to him. Has it occurred to anyone that he may turn out to be a bona fide bum?

Yes, it has occurred to me.

But, I still think the idea is funny.

Senator Barack Obama, lives in a mansion he bought for $1.9 million in Chicago. George Obama, 26, is the youngest of the presidential candidate's seven half-brothers and half-sisters, and while the other siblings are close, he told the magazine he was embarrassed he lived "on less than a dollar a month", and so never mentioned his famous half-brother. "I live like a recluse, no-one knows I exist," he reportedly told the magazine. "I live here on less than a dollar a month." Check out George-Obama.Com