Why The Denial? - Terror Arrest Pre-emptively Declared To Be NOT CHUNNEL-RELATED 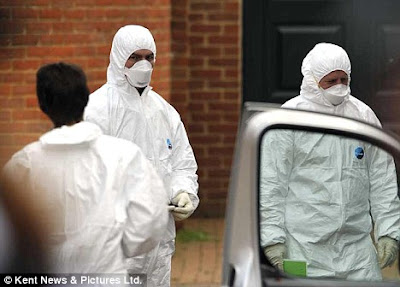 Wait a minute. We were already told the 9/11/08 Chunnel fire was NOT TERROR-RELATED.
So, of course, we, like the good citizens we are, believed it.
Now, here we are being told that a terror arrest they made yesterday is not related to the Chunnel fire.
Why tell us this? We already know the Chunnel fire was not terror-related.
What do they think, we're stupid?
Uh, that's a rhetorical question.
From the Daily Mail:

Terror suspect arrested in raid on luxury home in country village
A man was arrested under the Terrorism Act after a dawn raid on his luxury family home this morning.
The suspect, believed to be in his 30s was arrested after police surrounded the £325,000 home in an exclusive new-build executive estate.
The detached house is occupied by two couples - believed to be two brothers and their wives, who have been named locally as Mehmet and Kiymet Ozbek and Fotma and Kijmer Ozbek.
A Kent Police spokesman said that the man was being questioned at a police station and inquiries were continuing.
There is no suggestion that the arrest was connected to the Channel Tunnel fire last week.

Based on the names, they appear to be Turks.

Thanks. I wouldn't have known that.

You got any read on whether these guys were involved in the Chunnel "fire" on 9/11/08.

I have no idea whether or not they were involved in the Chunnel fire.

As for the names, anyone who has been following events in Britain and other parts of the world for a while will know with 100% certainty that they are not Pakistanis or Bangladeshis. Mehmet is a common Turkish name and Turks have a penchant for names that end in "t". So, my hunch is that they are Turks or proto-Turks from Central Asia (Uzbeks?).

Well, the authorities say there was no terrorism involved in the Chunnel "fire", so I guess that's that.

That disclaimer at the end of the article is quite revealing as far as I'm concerned.

I should say so.

Or "Excuses not asked for, are a clear accusation".

The MSM and the politicians really believe citizens are idiot. The real tragedy is that there are an important number of citizens who are stupid. Or just act as if they really were...