Brussels Man Beaten to a Pulp For "Drinking During Ramadan" 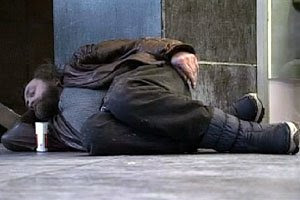 From Islamisation (via Google's translator):

This heinous attack took place Monday in Brussels, rue Blaes, around 19h. A homeless man was beaten with extreme violence by a Muslim father and son . The father started screaming at the victim that he had "no right to drink during Ramadan," before attacking him, then joined by his son who was guilty of the worst acts of violence. Serge, the homeless in question was actually in the process of drinking a beer.
Rashid's son, 21, was arrested and placed under arrest warrant for assault and battery resulting inability to work, as the prosecution confirming the facts. As explanation to the judge, both fanatics have explained that they feel their aggression was the self-defense!
And, when the attack was over, here's what the man looked like:
Posted by Pastorius at 8:57:00 pm

While I am a fan of your site, that is not cool to put up that particular picture. That is not the victim, everyone knows who that really is. It is in very poor taste to equate the two. Even for the shock value of it. I am disappointed in this.

This is a sanitized report. The attack was much worse: the tramp was beaten with an iron bar with nails and it punctured an artery in his leg. You can read about it in the Brussels Journal.

I didn't know that wasn't the guy. this is the way the report was sent to me.

You say everyone "knows who that guy is."

Sorry about any confusion I have created here.

Pastorius, That's a screen cap from Mel Gibson's The Passion of the Christ. Shortly after Jesus is scourged.

And I saw the movie too. Jesus!

I'll be damned. Islamisation is running it with that pic. Brussels Journal has the other. WTF?

But, that's a pretty fucked up mistake to make, isn't it?

Somehow I don't think it was a mistake.

Pasto -- Rereading your comment if you meant the mistake was yours it was an honest one. If you meant it was Islamisation's then I say I don't think it was a mistake. Didn't want my remark misconstrued as a poke at you. & I see you took the pic down. Very classy move from a class act and class site.

pasto-thanks for taking my initial concerns to heart. I believe that it was an honest mistake. well done indeed.

Thanks for pointing out the mistake you guys. I didn't know. It looked like the same guy to me. I believed it.

Pretty embarrassing. I do make a lot of dumb mistakes. Or perhaps I just punish myself too much for the mistakes I do make.

Islamisation should be ashamed for running it that way. Folks who've never seen the movie wouldn't know and those that did would be rightly offended. Having read you both here and at CUANAS for a long time now I think I know your way well enough to say you wouldn't run something like that intentionally so don't punish yourself over it. Islamisation is a different matter entirely.

Thanks for the kind words.