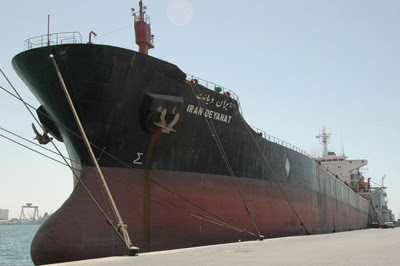 From the Long War Journal:
A tense standoff is underway in northeastern Somalia between pirates, Somali authorities, and Iran over a suspicious merchant vessel and its mysterious cargo. Hijacked late last month in the Gulf of Aden, the MV Iran Deyanat remains moored offshore in Somali waters and inaccessible for inspection. Its declared cargo consists of minerals and industrial products, however, Somali and regional officials directly involved in the negotiations over the ship and who spoke to The Long War Journal are convinced that it was heading to Eritrea to deliver small arms and chemical weapons to Somalia's Islamist insurgents.

It was business as usual when speedboats surrounded the MV Iran Deyanat on August 21. The 44468 dead weight tonnage bulk carrier was pushing towards the Suez and had just entered the Gulf of Aden - dangerous waters where instability, greed and no-questions-asked ransom payments have led to a recent surge in piracy. Steaming past the Horn of Africa, 82 nautical miles southeast of al-Makalla in Yemen, the ship was a prize for the taking. It would bring hundreds of thousands of dollars - possibly millions - to the Somalia-based crime syndicate. The captain was defenseless against the 40 pirates armed with AK-47s and rocket-propelled grenades blocking his passage. He had little choice other than to turn his ship over to them. What the pirates were not banking on, however, was that this was no ordinary ship.

The MV Iran Deyanat is owned and operated by the Islamic Republic of Iran Shipping Lines (IRISL) - a state-owned company run by the Iranian military that was sanctioned by the U.S. Department of the Treasury on September 10, shortly after the ship's hijacking. According to the U.S. Government, the company regularly falsifies shipping documents in order to hide the identity of end users, uses generic terms to describe shipments to avoid the attention of shipping authorities, and employs the use of cover entities to circumvent United Nations sanctions to facilitate weapons proliferation for the Iranian Ministry of Defense.

The MV Iran Deyanat set sail from Nanjing, China, at the end of July and, according to its manifest, planned to travel to Rotterdam, where it would unload 42,500 tons of iron ore and "industrial products" purchased by a German client. Its arrival in the Gulf of Aden, Somali officials tell The Long War Journal, was suspiciously early. According to a publicly available status report on the IRISL Web site, the ship reached the Gulf on August 20 and was scheduled to reach the Suez Canal on August 27 - a seven day journey. "Depending on the speed of the ship," Puntland Minister of Ports Ahmed Siad Nur said in a phone interview on Saturday, "it should take between 4 and 5 days to reach Suez."
Suspicion has also been cast on the ship's crew, half of which is almost entirely staffed by Iranians - a large percentage of Iranian nationals for a standard merchant vessel. Somali officials say that the ship has a crew of 29 men, including a Pakistani captain, an Iranian engineer, 13 other Iranians, 3 Indians, 2 Filipinos, and 10 Eastern Europeans, possibly Croatian.

The MV Iran Deyanat was brought to Eyl, a sleepy fishing village in northeastern Somalia, and was secured by a larger gang of pirates - 50 onboard and 50 onshore.
Within days, pirates who had boarded the ship developed strange health complications, skin burns and loss of hair. Independent sources tell The Long War Journal that a number of pirates have also died.
"Yes, some of them have died. I do not know exactly how many but the information that I am getting is that some of them have died," Andrew Mwangura, Director of the East African Seafarers' Assistance Program, said Friday when reached by phone in Mombasa.
Pastorius comment; Anonymous points out that this sounds like it could be radiation poisoning:
Radiation sickness is illness and symptoms resulting from excessive exposure to radiation.

Sounds like the USN should pay a visit and enforce the Law of the Seas and liberate the ship from the clutches of the pirates. At the same time, they can claim that they're securing the cargo - and to do so they must review the manifest and ensure that the items are all present and accounted for.

I wish that was not wishful thinking.

Actually it sounds a lot like radiation poisoning.
http://www.nlm.nih.gov/medlineplus/ency/article/000026.htm

You know, shows you how lazy I am. I thought that and I didn't even look it up.

What's wrong with me?

Yep, it sure sounds like radiation sickness, and, based on how quickly those pirates dropped dead, some super "hot" stuff, too. Wonder why the ship's crew are OK? Is there something aboard the ship that they know to avoid?

This sounds a bit fishy. WHY only the pirates? Why have the crew, who have been aboard for some time, not shown signs of such "radiation" poisoning? It sounds more like there is an attempt to mislead everyone so the Iranians can find a way to unload the hidden cargo without attracting attention to what they are doing. By mooring off shore, they keep "prying eyes" away. With the bogus "radiation" scare, they keep others from wanting to get too close.

It is possible that the pirates were given a radioactive material in the food they ate, thus causing the symptoms. But, the symptoms only showing up on the pirates is a dead giveaway that something is fishy in somalia.

I think they are co-conspirators.

That being said, I have no explanation for why only the pirates are ending up ill.

I don't understand any hesitation.

Inspection to make sure all is in order

So sorry for any inconvenience

Macker,
LOL - I love that post. That's a great way to tell a news story.


Scherzo,
Do make sure you have your eyes closed and your fingers jammed in your ears while you repeat the mantra. It works better that way.