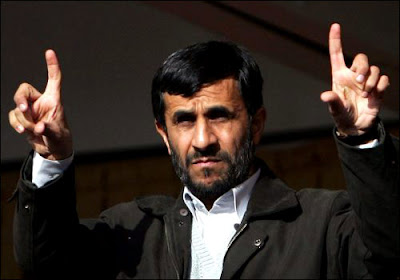 For about three or four years now, Iranian President Mahmoud Ahmadinejad has been telling us it is time for the world to see the Jewish state of Israel "wiped off the map".
If that isn't outright Jew-hatred, I don't know what is.
But, Reuters doesn't think so. Reuters believes Ahmadinejad is reaching out to Jews. I suppose, if Hitler were actually alive today, Reuters would be telling us he was reaching out to the Jews too.
From Little Green Footballs:

There’s something very rotten at Reuters, and this headline is a glaring symptom:Accused of anti-Semitism, Ahmadinejad meets Jews.

Reuters’ headline is clearly designed to imply that Ahmadinejad reached out to Jews after being accused of antisemitism, but the reality is the exact opposite.

The “Jews” they’re talking about belong to the lunatic fringe group called Neturei Karta, whose total world membership is about 10. Despite the fact that Neturei Karta have no influence on anyone, and exist only to be used for propaganda by antisemites, the Associated Press and Reuters make sure to photograph and write about them every single time they surface at an anti-Israel event. And they’re at every high profile anti-Israel event.

The article itself doesn’t try to hide what went on at this meeting, but anyone who reads the headline alone is going to get an insidiously false impression.

NEW YORK (Reuters) - A day after being accused of making anti-Semitic comments at the United Nations, Iranian President Mahmoud Ahmadinejad met a fringe group of ultra-religious Jews who seek the dismantling of the state of Israel.

“Zionism has greatly weakened and, God willing, it will be destroyed soon and then all Jews, Muslims and Christians can live peacefully with one another,” Ahmadinejad told nearly a dozen rabbis from Neturei Karta International on Wednesday.

The group is a small anti-Zionist organization that says it adheres strictly to the Torah, the Jewish holy book, which it says forbids the establishment of a Jewish state before the coming of the Messiah. It supports Palestinian sovereignty over the Holy Land and financial restitution for past losses. Its views are considered marginal by mainstream Jews who condemned Ahmadinejad’s speech on Tuesday as anti-Semitic, as did several world leaders, human rights groups and U.S. Democratic presidential candidate Barack Obama.

Marty Irom, spokesman for the non-profit group the Israel Project, which promotes security and peace in Israel, said Neturei Karta was a “very tiny fringe group that represents only themselves.” He said such meetings gave Ahmadinejad an “air of legitimacy which he should not have.”

He's reaching out to take their tickets to check them onto the train.

He's reaching out to confuse them enough to keep them from destroying his nuclear program before he gets it finished.