Some ideas never grow old. We are the Pamphleteers of the 21 st Century. And so, a few words from 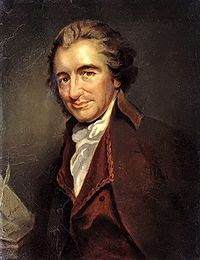 THESE are the times that try men's souls. The summer soldier and the sunshine patriot will, in this crisis, shrink from the service of their country; but he that stands by it now, deserves the love and thanks of man and woman. Tyranny, like hell, is not easily conquered; yet we have this consolation with us, that the harder the conflict, the more glorious the triumph. What we obtain too cheap, we esteem too lightly: it is dearness only that gives every thing its value. Heaven knows how to put a proper price upon its goods; and it would be strange indeed if so celestial an article as FREEDOM should not be highly rated.

. . (The Jihadis) with an army to enforce (their)tyranny, has declared that she has a right. . . "to BIND us in ALL CASES WHATSOEVER" and if being bound in that manner, is not slavery, then is there not such a thing as slavery upon earth. Even the expression is impious; for so unlimited a power can belong only to God. . .

. . .I have as little superstition in me as any man living, but my secret opinion has ever been, and still is, that God Almighty will not give up a people to military destruction, or leave them unsupportedly to perish, who have so earnestly and so repeatedly sought to avoid the calamities of war, by every decent method which wisdom could invent. Neither have I so much of the infidel in me, as to suppose that He has relinquished the government of the world, and given us up to the care of devils; and as I do not, I cannot see on what grounds (the Jihadis) can look up to heaven for help against us: a common murderer, a highwayman, or a house-breaker, has as good a pretence as he.

The United States' First Encounter with the Muslim World:

By 1783 America became solely responsible for the safety of its own commerce and citizens with the end of the Revolution. Without the means or the authority to field a naval force necessary to protect their ships in the Mediterranean, the nascent U.S. government took a pragmatic, but ultimately self-destructive route. In 1784, the United States Congress allocated money for payment of tribute to the Barbary pirates and instructed her British and French ambassadors (John Adams and Thomas Jefferson, respectively) to look for opportunities to negotiate peace treaties with the Barbary nations. Unfortunately, the price demanded for these treaties far exceeded the amount that Congress had budgeted.

In 1786, Thomas Jefferson and John Adams went to negotiate with Tripoli's envoy to London, Ambassador Sidi Haji Abdrahaman or (Sidi Haji Abdul Rahman Adja). Upon inquiring "concerning the ground of the pretensions to make war upon nations who had done them no injury", the ambassador replied:

It was written in their Koran, that all nations which had not acknowledged the Prophet were sinners, whom it was the right and duty of the faithful to plunder and enslave; and that every muslim who was slain in this warfare was sure to go to paradise. He said, also, that the man who was the first to board a vessel had one slave over and above his share, and that when they sprang to the deck of an enemy's ship, every sailor held a dagger in each hand and a third in his mouth; which usually struck such terror into the foe that they cried out for quarter at once. [2] [3]

Jefferson reported the conversation to Secretary of State John Jay, who submitted the Ambassador's comments and offer to Congress. Jefferson argued that paying tribute would encourage more attacks. Although John Adams agreed with Jefferson, he believed that circumstances forced the U.S. to pay tribute until an adequate navy could be built. The U.S. had just fought an exhausting war, which put the nation deep in debt. Federalist and anti-federalist forces argued over the needs of the country and the burden of taxation. Jefferson's own Democratic-Republicans and anti-navalists believed that the future of the country lay in westward expansion, with Atlantic trade threatening to siphon money and energy away from the new nation on useless wars in the Old World.[4] The U.S. paid Algiers the ransom, and continued to pay up to $1 million per year over the next 15 years for the safe passage of American ships or the return of American hostages. Payments in ransom and tribute to the privateering states amounted to 20 percent of United States government annual revenues in 1800.

Jefferson continued to argue for cessation of the tribute, with rising support from George Washington and others. With the recommissioning of the American navy in 1794 and the resulting increased firepower on the seas, it became more and more possible for America to say "no", although by now the long-standing habit of tribute was hard to overturn.

"it became more and more possible for America to say "no", although by now the long-standing habit of tribute was hard to overturn"

seems we've forgotten how to say no.

The book "Six Frigates" by Ian Toll should provide the script for a movie about this very topic.

That's one of the books on my pile.

MR - Six Frigates is one of the BEST books I've read in a long time. You'll LOVE it!

You know, this post is short and to the point. Perfect trading card size info . . .you know the kind of cards we collected when we were kids. Wouldn't it be great if a deck of collectors cards depicting the Great Thinkers of Western Civilization's opinion of Islam?

The Muslims (Barbary) tried again during the US conflict w/Britain-1812..So-1815- Madison sent the fleet to finish the job...Algiers had to pay compensation and release hostages and promise not to OFFEND again..
Madison- "It is a settled policy of America,that as peace is better than war, war is better than tribute. The United States, while they wish for war with no nation, will buy peace with none."

I want statesmen today who are cut from the same cloth!!
C-CS

Well, I swapped the word Jihadis where Britain and British used to be, of course, but otherwise a deck like that would be cool indeed. Funny how by just swapping that word it doesn't at all change a thing about the sentiment. Hmm...

Maybe Pastorius could find place for the pciture & quote in the sidebar, maybe under the parallel Gov't statment.

We're doing the same work Thomas Paine did 230 years ago, just a different enemy. Getting the info from others, printing it, distributing it even when we're linked by others. Getting the truth out.

That's a proud mantel to take on.