The loving and devoted Muslim father

Here’s an example of the way religions sometimes define love: go and beat the shit out of yourself.


A 47-year-old Muslim from Rugby in Warwickshire, England, has been given a six-month suspended prison sentence – according to the BBC and others – for encouraging his ten-year-old son to beat himself with an implement that sports blades and chains in a ceremony called zanjeer matam, which commemorates a seventh-century martyrdom in the Muslim world.
Really relevant to today’s innocent ten-year-olds living in the UK, what?

The BBC story tells us that the man – who can’t be named for legal reasons – is “the second Muslim to be convicted of cruelty as a result of allowing a boy take part in the ceremony”. 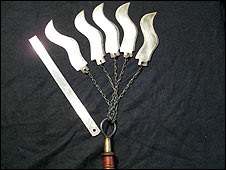 The ritual was said to have happened at a Birmingham mosque. The guilty man, who pleaded not guilty, said he acted out of “love” and “devotion”.
Should we naïvely believe that these two disturbing incidents are the only ones that have ever happened in the UK, or just the tip of an iceberg? Maybe something in between? Given (a) that religionists go in for ceremonies, (b) that this is a ceremony and (c) that there is an implement made specifically for the purpose (as depicted by the BBC website in the picture shown here), it would be reasonable to believe that it’s happening all the time.
Posted by Andy Armitage at 9:59:00 am

Labels: Islam in the UK

The UK does have strict laws regulating the poessession of weapons, too - I wonder if that multi-bladed whip violates any.

There is an exception for religious items though, to keep the sikhs from suing - their religion requires they carry a knife on their person at all times. Knife law is not an area in which I posess any great knowledge.

And, people got angry with Mel Gibson for the violence in the Passion. This shit is self-inflicted.

Truth is, this behavior would probably be legal in the United States, as it would be protected under Freedom of Religion.

I have transgressed and need to be chastised. That ten year old boy is welcome to come and flagellate me anytime.