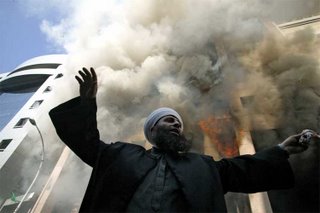 By the novelist, Matthew Bracken, at Gates of Vienna:


More than a decade ago I wrote my first novel, Enemies Foreign and Domestic. Part of my motivation was to establish my bona fides at forecasting social, political and military trends. I didn’t like the direction America was heading, and I wanted to warn as many readers as possible about some of the dangers I saw coming.

At the end of 2015, I hope that my past success at prognostication will encourage people to pay heed to this essay.

As we roll into the New Year, we are witnessing the prelude to the culmination of a titanic struggle between three great actors. Three great social forces are now set in motion for a 2016 showdown and collision that will, in historical terms, be on par with the First and Second World Wars.

Two of these great social forces are currently allied in a de facto coalition against the third. They have forged an unwritten agreement to jointly murder the weakest of the three forces while it is in their combined power to do so.

So what are these three great social forces? They are Islam, international socialism, and nationalism.

By the way, I really like the following paragraph from the essay:


The motivation lies within the words of the Koran and Hadith. Most simply distilled, in the earthly realm, these Islamic texts offer immoral men sanction for thrill-killing, looting, raping, and capturing infidel slaves, and when these jihadists are killed, they are promised a perpetual orgy with seventy-two nubile virgin slave girls in Mohammed’s sick, evil and perverted Muslim paradise. Unlike the Jewish and Christian Bibles, the Koran and Hadith appeal not to man’s better angels, but to the darkest aspects of human nature. (Tellingly, Moses and Jesus are said to have climbed to mountaintops to communicate with their God, while Mohammed received his messages from Allah deep inside a bat cave.)

I heartily recommend Matthew Bracken's "Enemies" trilogy. I believe his vision of the future of America is spot on. Not a standard apocalyptic blow-out. Just a rapid to decline to Third World standards in society & government. Read them, you won't regret the investment of time.

I will also recommend Dan Simmons Flashback to you.

Great. Never heard of it. I will put it on Kindle today. Should finish the latest Gabriel Allon novel by Friday so I will read the Simmons over the weekend.

Bracken has a web page enemiesforeignanddomestic.com. It looks ghastly but you can access "Huge Excerpts" from each novel. The first hundred pages or so. Also he is advertising free Kindle downloads of all three books from Dec 1 - 3.

And, no, I don't know him, never met him, and do not get any kickbacks, LOL.

I see that his first book has over 800 reviews on Amazon.

I'm guessing that means he has A LOT OF BOOK SALES, which translates to a good income for him.

I said it before n our BTR show. The elitists is cahoots with the Islamists are the real enemy. Not the donkeys or the elephants, not the liberals or conservatives, not the right or the left - but the elitists in each of those factions.

Meanwhile, we, the non-elite, are merely BLOODMEAL FOR THE PLANT THAT'S PLOWED.