Putin Says U.S. Knew The Flight Path of Russian Jet That Was Downed - Jet Was HIt at Exact Time and Location Reported To U.S. 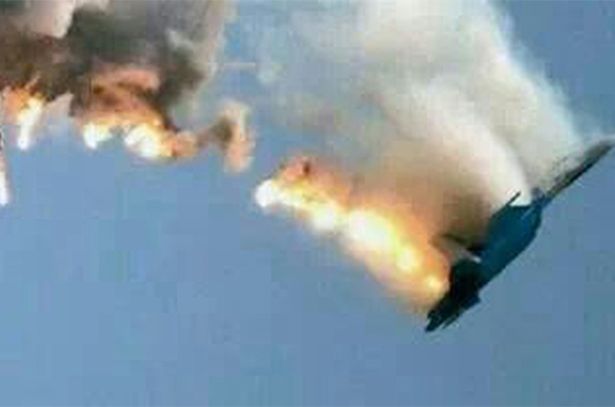 It sounds to me as if Putin is accusing the U.S. of some kind of complicity with Turkey.

If so, I tend to believe him.

US knew flight path of plane downed by Turkey


Moscow (AFP) – President Vladimir Putin said on Thursday that Russia had given prior information to the United States of the flight path of the plane downed by Turkey on the Syrian border.

“The American side, which leads the coalition that Turkey belongs to, knew about the location and time of our planes’ flights, and we were hit exactly there and at that time,” Putin said at a joint press conference with French counterpart Francois Hollande in the Kremlin.

Meanwhile, even the Liberal Politico magazine is coming closer to admitting Turkey is in league with the Jihadists:

Is Turkey Really at the Table?


It claims to be part of the solution in fighting ISIL, but often it’s been part of the problem. To Westerners, it might seem that Vladimir Putin was exaggerating in anger when, after a Turkish F-16 on Tuesday shot down a Russian fighter jet allegedly violating Turkish airspace, he referred to the government in Ankara as “terrorists’ accomplices.”

Americans aren’t used to thinking of Turkey—our NATO ally and most powerful backstop in the Muslim world—in this way. And surely Putin is just engaging in some saber-rattling.

But as Turkey and Russia dispute the incident, it is casting a spotlight on one of the most troubling developments in the evolving struggle in the Middle East:

When it comes to fighting the Islamic State and extremism more generally, Turkey—and President Recep Tayyip Erdogan—has become a significant part of the problem, rather than part of the solution.

"Peaceful Arab spring demonstrators": Really? Arab spring was a MB operation to finally establish the caliphate that they'd been planning for since late 1920s. It was never meant to be peaceful. Everyone in the Gulf States understood that.The only reason those demonstrations were successful in the beginning was precisely because of Obama's address in Cairo in June 2009 where Obama invited the MB even though the Egyptian government was against it.Obama's apologies and fellating of Muslims clearly signaled to the MB that they could carry on with their operations and they wouldn't have to worry about America stepping in.Magically a year and a half later, things start going to hell while the media is ever ready to give it a cute name like "The Arab Spring".Tunisia, Egypt, Yemen etc showed both the Gulf states and Assad that this wasn't some sort of popular uprising but rather a planned move by Muslim Brotherhood. Which is why Bahrain took swift action against protests there. Saudi Arabia, Kuwait and the UAE cracked down on all planned protests.Magically Qatar didn't get any "Arab Spring" related problems even though they're just as authoritarian as the other Gulf states. Obviously it has nothing to do with the fact that they bankroll Muslim Brotherhood! /sarc off.Assad acted the only way he should and could have. I'd take Assad over Muslim Brotherhood any day of the week.As for whether the Russians are attacking "anyone who is attacking Assad". Well no sh*t. Every single group armed by the US is either selling weapons to ISIS or has outright joined them. I say kill them all. They're all ISIS as far as I or anyone else who knows a thing or two about the middle east is concerned.
Posted by Pastorius at 12:54:00 pm

Whistleblower said Turkish president Erdogan would take Turkey to war by downing a Russian military jet back on Oct. 12, 2015 via BareNakedIslam

Seven links on Turkey, Russia and the Islamic State via VladTepes - of particular interest is a developing story (#2) Meanwhile, the text below is verbatim from my email:

a message to me:

Xxxxxxxx, Turkish MIT & CIA have been working together for a few years. There is an entire warehouse full of weapons in Adana that belongs to the U.S. Consulate.

I’ll try to arrange an interview with someone that worked there.

American credibility is at such a low ebb that there is no way to determine which outrageous accusations are true. When you look at the track record of the Obama Administration, all you can do is shrug and say, Yeh, maybe.