What If The Turkish Shooting Of Russian Fighter Jet Was Also To Protect President Obama? 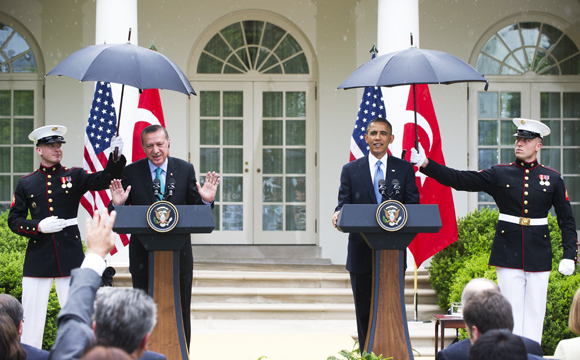 Look At This, Erdie, I Can Get These Stupid Infidels
To Do Anything I Want Them To Do


The presumption within the controversy (as it is generally discussed by the media) is that CENTCOM bosses changed the intel to give the impression of success to please the White House. But what if that wasn’t the reason? russian fighter planeObama Racine

What if the inept and inadequate response was not ineptitude or inadequacy, but rather an intentional and deliberate ploy to appear inept and inadequate.   The faulty intelligence story then is used as an EXCUSE, to hide the real reasoning – plausible deniability.Wouldn’t an investigation into the claims of those providing the intelligence then be a risk to the White House?

FOUR DAYS AGO 11/21/15  – A Congressional task force is being created to investigate whether U.S. Central Command, headquartered at MacDill Air Force Base, manipulated intelligence.The chairmen of the House Permanent Select Committee on Intelligence, the House Armed Services Committee and the House Defense Appropriations Subcommittee “are creating a task force to investigate allegations of intel manipulation at CENTCOM,” said Jack Langer, spokesman for select committee Chairman U.S. Rep. Devin Nunes, a Republican from California.CENTCOM received the request from Congress for information on intelligence assessments and, in coordination with the Department of Defense, “has responded accordingly,” said Air Force Col. Pat Ryder, a CENTCOM spokesman.Ryder said that he cannot comment on the information provided because of an ongoing investigation into allegations that CENTCOM altered intelligence reports to provide a rosier picture of the fight against the so-called Islamic State jihadi group.

Wouldn’t such a congressional investigation be considered a risk?  Might such inquiry take the conversation in an entirely new direction and expose a hidden, albeit ideological, agenda?

Essentially, the scenario would be: the White House was provided accurate and specific intelligence of ISIS operations, movements, locations, actions and activities, and yet none of that information was every used to carry out the publicly stated objectives….….nothing ever done to destroy those ISIS operations, disrupt those activities, target those locations.  Intentionally nothing done.

Two ideological NATO Allies, Turkey and U.S.A., who have leaders with ulterior motives in support of ISIS (aka. for all intents and purposes -politically and ideologically- the Muslim Brotherhood).    President Obama essentially aiding his friend and Islamist BFF President Erdogan through “non action” against an entity benefiting the intents of Erdogan.  But Obama has to keep up anti-ISIS appearances for domestic consumption.

What if…. say, two months ago, Jordan, via King Abdullah, and Egypt via Fattah el Sisi then frustratingly turned to Russia to discuss how this U.S. anti-ISIS effort is a false fight in media appearance only.   Their specific two countries are suffering, and becoming more destabilized as the radicalization grows.What if…. President Obama views Abdullah and el-Sisi as inauthentic Arab leaders who exist only as a result of a centuries old euro-Colonialism.  Ideologically illegitimate and unworthy of U.S. support under his leadership.What if…. an agreement is reached between Putin, Abdullah and el-Sisi, and then a few weeks later – all of a sudden along comes an actual military entity (Russia) who DOES TAKE ACTION based in large part on the same intelligence the White House was ignoring.Now, with Russia actually attacking the Islamic State, ISIS is actually and specifically being targeted.  Real loses, not the New York Times kind of media losses – but actual, military and economic losses.

Listen to what Putin has to say:

Yup. Everyone knows it. Turkey.