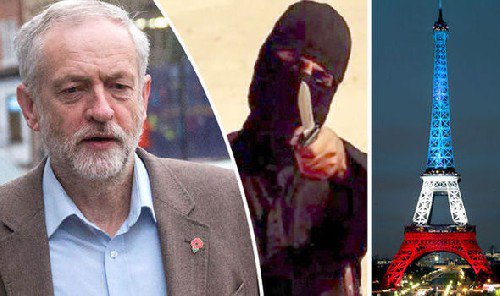 Apparently, This Guy Was Elected
To Show Hatred For His Own Country


The embattled leader said the nation should not be “drawn into responses that feed a cycle of violence and hate” after a United Nations resolution that countries should “combat by all means this unprecedented threat” from the sick terror group.

The Opposition leader told activists in Bristol: “The dreadful Paris attacks make the case for a far more urgent effort to reach a negotiated settlement of the civil war in Syria and to end the threat rom ISIS.

“It is the conflict in Syria and the consequences of the Iraq war which have created the conditions for ISIS to thrive and spread its murderous role.”

He said Britain’s involvement in “a succession of disastrous wars that have brought devastation to large parts of the wider Middle East” had made the UK less secure from attack.

Mr Corbyn’s latest far-fetched remarks are likely to cause tensions in an already riled up Labour party who insist time at the negotiating table with the sick terror group, who claimed responsibility for last week’s attacks in the French capital, have long passed due to the huge terror threat facing Britain.

The left-winger sparked fury among his MPs last week when he initially appeared to suggest he did not back ‘shoot to kill’ policies if Britain’s security forces faced a similar jihadist attack in the UK.