The Fatal Consquences Of Islamophilia 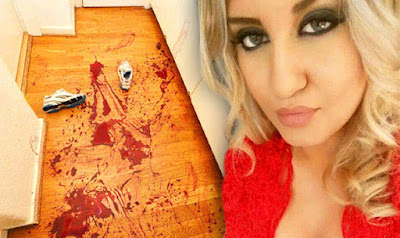 From Blood-smeared floors where Swedish social worker was stabbed to death in ‘frenzied attack':


BLOOD smeared across floors and splattered up walls, these shocking pictures reveal the horrifying last moments of a Swedish social worker murdered in a “frenzied attack” in a CHILD asylum centre.

Alexandra Mezher, 22, left a trail of blood as she desperately tried to pull herself to safety and begged for her life.

The graduate bled to death from a severed artery in her thigh after she was stabbed repeatedly in the vicious attack.

Asylum seeker Youssaf Khaliif Nuur, who claimed to be a minor in order to stay in the children’s centre, has been charged with Miss Mezher’s murder.

The Ethiopian, who is at least 21 years old, claims he can’t remember the incident which took place on January 25.

The gruesome pictures reveal how Miss Mezher desperately fought for her life after being stabbed as she tried to break up a fight before two young migrants she was caring for....

More at the above link.

How well informed about the barbarism of Islam was social worker Mezher? Poorly informed. And for this reason: the halls of academia are devoted to indoctrinating students with the lie that Islam is a religion of peace.
Posted by Always On Watch at 2:40:00 pm