Ahmadinejad Is Preparing Another Holocaust 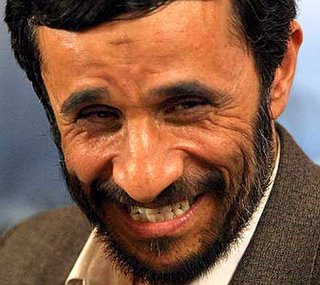 From The American Thinker:


Before the founding of the modern State of Israel, the anti-Semitic view of the historical role of the Jew was that of half-willing victim. Jews were supposed to wait patiently while the Poles, Tartars, and Cossacks threw the bones to see who got to burn down the village this time. Many of us thought this subjection ended in 1948 and would never again disgrace humanity.

Discussions surrounding the Iranian nuclear threat suggest this judgment may have been premature. Talks concerning Iranian nuclear programs between Iran on one hand and Britain, France, and Germany on the other exhibit the nature of a ritual shadow play, one that consistently overlooks what should be the most salient fact: that Israel itself possesses nuclear weapons.

You’d think this would lend some sense of urgency to efforts to defuse the crisis, but you’d be wrong. The Jews are once again expected to wait while the dice are being tossed, this time until Tel Aviv and Haifa vanish in blinding flashes of fire.


As it says in the Bible, the Roman Centurions cast lots for Jesus the Jews clothing as he hung dying on the cross.

Things never change, do they? The god of this world is intent on killing the Jews. Why do you think that is?

Let us look at more, if we dare:


The criteria for a preventive nuclear war have never been codified, simply because such an alternative is too ghastly to contemplate. But the possible need for such an action is in little doubt.

Few would argue against the necessity of a preventive strike against a nuclear-armed Hitler. In 1948, Bertrand Russell, godfather of the peaceniks, publicly suggested such a strike against Stalin’s USSR (he went to great pains in later years to deny ever saying any such thing, but the printed record doesn’t lie). For that reason, it’s difficult to say what factors are required to justify such an action.

But the case of Iran – a demonstrable record of bloodthirstiness and callousness, an expansionist messianic ideology, a foreign policy based in large part on anti-Semitism, rule by a hallucinatory fanatic, explicit threats of a nuclear first strike – pushes any conceivable envelope.

I don't think we need to go nuclear on Iran. I think we just need to bomb their regime into oblivion.

Go read the rest at The American Thinker.
Posted by Pastorius at 3:35:00 am

Going nuclear on Iran would be bad, right?

I think it would be? Why are you asking the question?