What The Hell Is Going On? 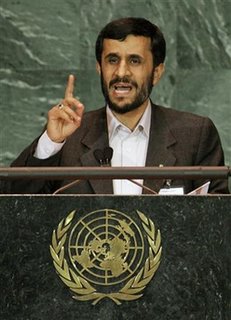 What do you think they needed to discuss?

Ahmadinejad said he "strongly supports the Palestinian people's struggle" during the meeting, according to Popular Front for the Liberation of Palestine (PFLP) official Maher Taher Friday.

Taher said the militant chiefs pledged to Ahmadinejad that the "Palestinian resistance and struggle would continue" against Israel.

"We expressed our solidarity with Syria, which is under pressure due to its national positions, as well as with Iran which has the right to possess nuclear technology for peaceful purposes," he added.

The meeting came one day after Islamic Jihad claimed a suicide attack in Tel Aviv that wounded 19 people. Israel blamed Tehran and Damascus for supporting the attack.

"The attack was financed by Tehran, planned in Syria and carried out by Palestinians," Israeli Defense Minister Shaul Mofaz was quoted as saying by a ministry official.

Syrian President Bashar al-Assad did not attend Ahmadinejad's meeting with the Palestinian chiefs, though he and Ahmadinejad met Thursday in Damascus as the two allies reaffirmed their ties amid increasing international pressure.

During his first visit to sole regional ally Syria since his shock election win in June, Ahmadinejad described Israeli Jews as "migrants" and asked if Europeans would be willing to accommodate them.

"Give these migrants authorization to come into your countries and you will see that they no longer want to live in occupied (Palestinian) territory," Ahmadinejad said during a meeting with high-ranking Syrian officials.

"Are you prepared to open the doors of your country to migrants so that they can move freely throughout Europe? Are you going to guarantee their security and no longer engage in anti-Semitic repression if they come into your countries?" he asked, adding that he doubted Europeans' "sincerity."

Ahmadinejad and Assad were to meet later Friday before the Iranian leader ended his two-day visit to Damascus.

... do the Iranians know about an impending LARGE SCALE jihadoterrorist attack - in Europe, or the USA, or anyhwere else in the West? After all, this move comes DIRECTLY on the heels of Binladen's announcement/truce-offering/warning: "preparations are underway." I believe that it is in anticipation of a series of large scale jihadoterrorist attacks.

JP at Americans for Freedon expressed why very succintly:

I am toubled by the combination of the following recent events:OBL tape, Amadinejad visiting Damascus, the upcoming IAEA / UN talks, Sharon's incapacitation and Chirac's vow to nuke any state that attacks France with WMDs. Throw this together with the large disposible cell phone purchases in the past couple months in the US and it seems to me that Iran/Syria and Qaeda are whipping up some terror coordination in the near future to prevent action against the Iran nuke regime.

Add to that list, the information in the above article, that Ahmadinejad is meeting with terrorist organizations, and that he is, apparently, warning Europe to open their borders to Israelis, and it looks like something big may be in the works.
Posted by Pastorius at 7:06:00 pm

Perhaps we have a cultural disconnect, and they think that like the Byzantines when Mehmet arived, we are quarreling on our side of the walls.

Perhaps all our wondering about the american and other peoples being educated as to the REAL danger will be irrelevant because they are about to make the mistake so many others lying discarded by history have made about us all...

And WE, we all will be OPEC in 3 months.

On the other hand, maybe they are discussing caviar exports

Well, Epa, it depends on what kind of attacks they are. Anything less than nuclear would lead to their destruction. If they hit us with a nuke, the whole world changes, and it's anyones bet who will come out on top.

If they hit us with 1 >>several nukes, we (USA) will MERCILESSLY turn the entire area into a glass surfaced radioactive wasteland, leaving no 2 ashes on top of one another. We will leave any thought of liberal minded conscience behind and obliterate anything and everything. All of american history indicates just exactly this.

There can be only one conclusion to a trial of arms. They cannot WIN a war. What they were doing incrementally was much smarter for them.

My worry is 300 morons blowing themselves up in 300 malls ..TONIGHT.

Michael Ledeen has been writing about Iran for years and taking the current administration to task for failing to deal with this threat. While disheartened with the current predicament, he still believes supporting anti-regime revolutionaries is the best of a dwindling number of options. For your consideration!

Epaminondas: My worry is 300 morons blowing themselves up in 300 malls...

Could happen, you know. Maybe not in 300 malls, but the detonation of even a handful of suitcase nukes within the borders of the United States would change the world order. Or possibly even the detonation of one, as the world is held hostage by a nuclear-capable regime run by a guy with a messiah complex.

I used to read horror fiction. Now I don't. Nothing is scarier that what's happening in the world right now.

Does anyone here remember that a terrorism expert recently said that we're due for an attack within 30 days? Here is the link, dated January 11, 2006.

It's very worrying. I have made a list of all the supporters of Ahmadenijad in my blog. Morocco, Egypt, Lybia and ¡¡¡Castro!!! are on the list.

But the best thing of all is that they have asked ¡¡¡¡Israel to destroy their nuclear arsenal!!!

I think everyone here thinks the rest are idiots...

Spanish Eowyn,
Just a few minutes ago, a commenter left this at my blog:

Libya will be required to redeem itself to the Muslim world and the only redemption available is helping anihilate Israel.

Then I come here and see your list of Ahmadinejad's supporters. Yikes!

I hope the CIA and FBI are working overtime. And, Mossad too.

Spanish Eowyn, is Venezuela on the list? Saudi Arabia, Syria?

I just wonder what they're saying over at the Department of State, and I say that not without reason. I know people who have spent their whole careers there, and they all see the world and 'diplomacy' as a chess game. It's all strategy and how that will affect foreign contacts/allies. It's also always not public.

I'd rather just model myself on Tolkien's Eowyn and her spirit, as well as that of Spanish Eowyn. Public opinion must be turned around and we must all act at this point.

On the other hand, maybe they're just REALLY jazzed up about getting to see the Mahdi and Jesus's amazing swordplay over there. Wouldn't you be excited if you bought into that line of belief? I'd buy up cell phones for that kind of event, wouldn't you?

Yeah, I think this is a major buildup.

Found this round-up of all the threats to the West and to Israel pretty satisfying - relatively short and to the point...

Arabia Saudi is not (yet) but you have to remember the interview between Al-Sadr and King Fadh, a few days ago. Al-Sadr only has gone abroad twice: the first time was to see the Ayatollahs.

Here's a very compelling piece by Thomas Holsinger on why we need to invade Iran and stay for the duration. He offers good reasons to think that occupying Iran might not be much worse than occupying Iraq, and might even be easier. A must read if you haven't seen it already.