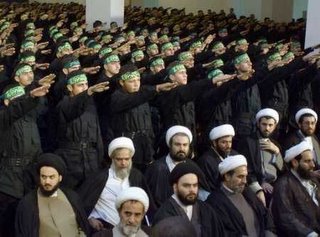 From the Candian Free Press:


Yesterday I wrote about the impotence that the world is showing through the UN in the face of Iran developing an Islamic nuclear weapon. There is a powerful historical parallel between the 1930s and today.
Adolf Hitler’s ideology combined a mystical destiny, an overwhelming sense of superiority, religion and an interminable hatred of Jews to form the fundamental tenets of National Socialism.

Mahmud Ahmadinejad, the president of Iran, presents a similar mix of beliefs that positions him and his country as the savior of Islam and the destroyer of all things Western. Ahmadinejad, Like Hitler, holds the belief that Jews are inherently evil and need to be eradicated in order to purify the world. And like Hitler, Ahmadinejad is arming Iran in preparation for a momentous confrontation with the hated Jews and their American supporters.

As Nazism flourished in most of Europe during the 1930s, so Islamism is now flourishing throughout the Middle and Far East. The avowed goal of Islamists, like that of the Nazis, is world domination and the extermination of the Jewish people. As such, the bellicose statements emanating from the likes of Ahmadinejad, Osama Bin Laden, the Taliban and others are reminiscent of the bellicosity that Hitler and his minions displayed prior to WWII.

The West, with the exception of Israel and the U.S. are behaving in much the same manner that their grandparents displayed during the 1930s. That is to say they do not believe war will come if only the Islamists get what they want. Much effort has been made to offer Iran material wealth and favorable trading terms in an attempt to purchase their abandoning the attainment of nuclear weapons.

Yet, like Hitler, who took everything that was offered to him and gave nothing in return, Ahmadinejad is bound and determined that Iran will have nuclear weapons, his assertion that the nuclear program is for peaceful purposes notwithstanding.

In the 1930s the Spanish Civil War served as a staging ground for the confrontation between Nazism and the rest of the world, much in the same way that Iraq and Afghanistan are serving a similar purpose today. Currently, a surrogate war is being fought in these two countries between the West and Islamism. While the prosecution of that war and the performance of those fighting is admirable, the weaklings and appeasers at home are betraying the sacrifices made by the brave men and women who are daily risking and in many cases, losing their lives.

Again, there is a parallel between today and the 1930s in that no major European leader is willing to stand up to the Islamofascists in the hopes of achieving "peace in our time". And in the United States, the Democratic Party wants America out of these conflicts post-haste in an ill-conceived plan to regain political power, assuming that if America isolates itself the looming conflict will go away. Fat chance.

It has been said that those who do not learn from history are doomed to relive it. Unless we deal with the Islamofascist threat right now, we will have to deal with it at some point in the future on the streets of our cities. If nuclear weapons are now a part of the equation, then the outcome of this imminent conflict may not parallel that of WWII.

There is no doubt in my mind that once nuclear capability has been attained, the Islamists in Iran will have no qualms about using it against Israel or anyone else, for that matter. The mullahs have already done the math and they believe they can survive a nuclear exchange with Israel.

So the question is: Do we deal with it today or do we wait until it deals with us?
Posted by Pastorius at 2:51:00 am

Get an umbrella before it start to rain. We have to protect our mankind and our next generation. These nazis need to be stop. Hitler was not mentioned in the Koran. The Iranian President need to be killed or put him on a electric chair or something like that.

That is a haunting picture. These people must be destroyed. There is no other answer.

I agree Murtad Girl. Thank you for stopping by. I look forward to hearing from you in the future.