Islamic Jihad In The 18th Century? 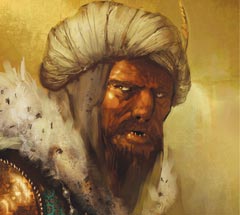 Avenging Apostate, one of the bloggers over at Pedestrian Infidel, has a great post on the Barbary Coast Pirates, who were the Islamic Jihad of the high seas back at the time of the birth of the United States. Here's an excerpt:


The newborn country had just won its independence from the then reigning world power Britain and was trying to stand up on its own feet. But even then it had an enemy—an enemy that wasn’t attacked by America first, that America didn’t have any serious dealings with—an enemy that still looms large to this day.

You guessed it right, Islam attacks us now—and it attacked us back then too.

Not because America had asked for oil or backed Israel, but because it was a duty on the Moslems of that time (as it is now) to subdue the non Moslems and demand from them the Jizya tax. And strangely enough, they managed to do so for some time.

Once America won its independence in 1783, word of this far-away event eventually reached the Islamic city state of Tripoli (now in Libya) and its barbarian (Moslem) allies of Morocco, Algeria and Tunisia. These Moslems quickly decided to impose the Jizya tax on all American ships, ‘ordering’ the new nation to pay the Moslems the ‘Jizya’ tax, or else its ships in the Mediterranean will be looted and plundered.


Go to Pedestrian Infidel and read the rest.
Posted by Pastorius at 9:24:00 am

Golly, those nasty pirates must have just misunderstood their 'religion of peace'. I'm sure that if they had properly understood their 'prophet's' teachings, the whole unfortunate jizya and sticking it to the rich infidels would never have happened.

Make sure you read both parts about the Barbary pirates at PI. Who says history doesn't repeat itself...especially when Muslims are involved.