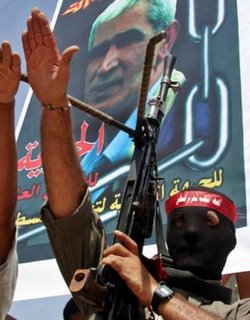 I'm going to join Little Green Footballs in posting the Hamas Charter today. Please keep in mind that the last paragraph here is straight from the Koran; the Holy Book of the Religion of Peace:


"Our struggle against the Jews is very great and very serious...The Movement is but one squadron that should be supported by more and more squadrons from this vast Arab and Islamic world, until the enemy is vanquished and Allah’s victory is realised...

It strives to raise the banner of Allah over every inch of Palestine, for under the wing of Islam followers of all religions can coexist in security and safety where their lives, possessions and rights are concerned...

The Prophet, Allah bless him and grant him salvation, has said: ‘The Day of Judgement will not come about until Muslims fight the Jews (killing the Jews), when the Jew will hide behind stones and trees. The stones and trees will say O Muslims, O Abdulla, there is a Jew behind me, come and kill him...’


I would ask that everybody post this today. Please.
Posted by Pastorius at 11:26:00 pm