The Golden Balls Award: And The Winner Is ... 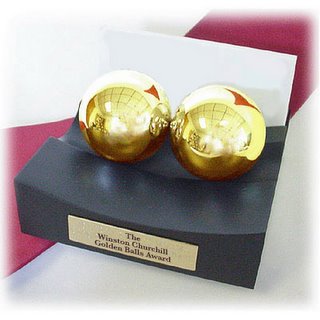 
Los Angeles’s top talkradio station is under fire from a Muslim group because of comments made earlier this month by morning man Bill Handel. The Council on American-Islamic Relations has demanded an apology from Handel for making fun of a stampede that killed hundreds of Muslims during an annual pilgrimage.

But Handel is set to fire back, the DRUDGE REPORT has learned.

Handel will apologize IF the Council on American-Islamic Relations:

1) Decries all acts of terror (described specifically, not generally)
2) Agrees that Israel is a sovereign nation with the right to defensible borders
3) CAIR has no ties of any sort, financially or otherwise, to any terror orgs or individiuals.

Ladies and gentlemen, we Infidels go through some depressing times, but I get the feeling things may be starting to turn. Yes, we bloggers can dish the truth, but the fact remains, we need our leaders in government and the media to stand up as well. Maybe, it is starting to happen.

Now, we need Condi and Bush to stare down the terror masters in Hamas with the same fury our man, Handel, is staring down the obfuscators at CAIR.
Posted by Pastorius at 4:36:00 pm

And, if you think about it, it makes a lot of sense. Whenever there's a conflict between two groups, be it two countries with disagreements or labour/management disputes, each side has a list of demands, and they are [hopefully] discussed-- hopefully a solution that fairly represents the most important issues of each side is found.

It seems that with groups such as CAIR, that represent [or claim to represent] Muslims, they are always making demands of everyone else-- but so many people are intimidated , and never make demands of them.

Its nice to see some people are finally waking up to the reality.

CAIR, of course, will try to weasel their way around this, but the more these issues are raised, the sooner the general population will realize what is really going on.

I listened to handel this morning and it seems he added this "apology segment". Albeit funny, It seems to me that any change in programming is to give them credit. He and his producer should just ignore their complaint.

I mean, Bill Handel, if you listen to him regularly, makes horrible jokes about pretty much EVERYBODY. I think at the TOP of this list are Jews, not muslims. This guy is the most down-to-earth guy i've ever listened to with razor wit. Now we hear a squeek from CAIR and they have to change programming? I hope it was just a one-timer.

This is why I have re-labeled CAIR's tactics "SCAIR Tactics". By the way, when can I be infidel babe of the week?

CAIR should be outta here. The organization went after Michael Graham last summer. Remember that one?

And regularly on CAIR's site, they go after newspapers as well.

I check CAIR's web site regularly to see what they are up to.

Sadly, there is an update to this story. Clear Channel caved.