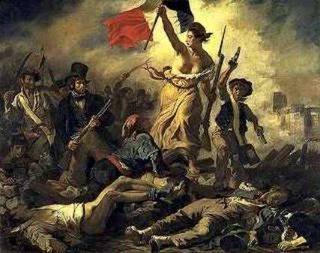 On Jan. 26 the Fwench people will protest against their government. They will wear blue scarves as a sign of their discontent. There is some people power if they'll take it and use it. And if the Fwench fail? Who cares. We have power too.

The Fwench are starting to fight back against thuggery. Yes, they are taking matters into their own hands, and they're going to let the world know they are fed up and not going to take it any more. On Jan. 26, they will don blue scarves in a silent protest against out of control Islamic rampage.

Well, it's a start. They're Fwench, after all. And according to the story below they're also going to ... who knows what.

Below we have two short pieces on citizens mobilizing in France.

PARIS -- French Interior Minister Nicolas Sarkozy has proposed a citizen volunteer force to fight growing crime and hooliganism spilling from the urban ghettoes of the country.
The "citizens' reserve" would be unpaid and patrol the "sensitive areas," he said.
Critics immediately pointed out that such a force would have no legal authority and no weapons to resist aggression in the areas where they might be considered police informers.
The proposal comes a day after Mr. Sarkozy announced a plan to create a railway force of 2,540 police and paramilitary gendarmes that would secure trains across various jurisdictions.
The need for such a force arose after a mob of more than a hundred youths, thought to be North African immigrants, terrorized passengers on atrain running from Nice to Lyon in southern France on New Year's Day.
On Sunday, a group of young rappers occupied the small Chenay-Gagny railway station, immobilized a Paris-bound train and blocked other lines until they were dispersed by a tear-gas barrage.

Is France ready for a peaceful, pro-Freedom revolution?

That's what we are going to discover.

If revolution there is, it'll be blue.

The blue revolution has begun.

Why a blue Revolution? Because the French political situation is paralyzed and it is now up to the people to make themselves heard.

Three themes can unite a majority of French people:

No to havoc!
No to too many taxes!
No to incompetent politicians!

They are the demands of the blue Revolution.

In order to win, we ask French women and men to wear a blue scarf as a sign of support and recognition.

The blue Revolution wants to spare France the disaster that a civil war would mean. So, all together, let's wear the blue scarf, blue as the color of France and of a sky without clouds.

I'll sit in a public place and hope others join me. The point is to meet people face to face so we can form a real resistence to jihad and dhimmitude. It'll mean getting over some irrational fear of mayhem from the r.o.p. faction. They're no scarier than I am. Show up and I'll buy your coffee. And if you don't make it to Canada you might do the same in your own hometown.

"after a mob of more than a hundred youths, thought to be North African immigrants,"

Thought to be, eh? Well, now thats an interesting thought! lol (Sounds like the reporters aren't doing such a great job-- how come they can't find out who these "youths" really are? )

I wonder if all these "thought to be North African Immigrant" people are related in any way to those mysterious "Men of Middle Eastern Appearance" who terrorize Australian beach towns?

In all cases, however, it seems pretty certain that they are "youths".

Ah--- the sweet innocence of youth!

"Ah the sweet innocence of youth.:

Leave it to the French to fight Islamofascism with a fashion statement.

You know, I wonder if wearing a beret at a particularly jaunty angle would have brought Hitler to his knees?