I Freakin' Love Freddie Mercury And, Of Course, Muslims Hate Him 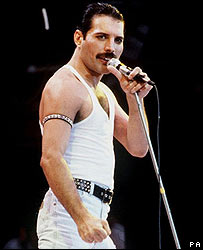 (UPDATE: An Anonymous reader corrects me. Freddie Mercury was not a Christian. He was a Zoorastrian. Didn't know that. Additionally, the reader says my interpretation of Mercury's lyrics below are completely wrong. That would not surprise me. Mercury seemed to be openly hostile to religion through much of his life.)

Many are not aware that Freddie Mercury was born in a Muslim country. I don't think he was Muslim himself. I believe he was a Christian (which I know seems a strange thing to say about such a hedonist), because of the following lyric:


Go ahead, my Christian brothers and sisters, and argue with me if you wish. But, that sounds like a profession of faith to me.

The point is, Muslims hate Freddie Mercury that they can't even allow a celebration of his birthday in his own home town:


ZANZIBAR, Tanzania (AFP) - Organizers of a 60th gala birthday party for the late Zanzibar-born rock star Freddie Mercury, have cancelled the weekend event after outraged Muslims threatened to disrupt it.

Faced with fierce opposition from Islamists, who complained the flamboyant Queen lead singer's lifestyle was offensive to many on the overwhelmingly Muslim archipelago, organizers said they had no choice but to call it off.

"We have decided to cancel the party after misleading and erroneous information was spread about it," said organizer Simai Mohamed Saidi, who runs a Freddie Mercury theme restaurant in the capital.

"I urge Muslim groups in the future to seek correct information from us instead of relying on rumors," he said in an open letter, adding the event was intended to be celebration to honor Mercury, who died of AIDS in 1991.

Saidi also lamented that the cancellation would hurt his intention to use the party to raise money for HIV/AIDS victims on Zanzibar.

Conservative Zanzibari Islamists last week demanded that authorities ban the party and then vowed to stage mass demonstrations if it went ahead, saying it would tarnish the islands' reputation and culture and promote homosexuality.

"We were ready to join forces against the party because we had information that a number of gays from abroad had come to take part," said Sheikh Azzan Hamdani of the association for Islamic Mobilization and Propagation (UAMSHO).

"We had also written letters to the tourist commission and the owner of the Mercury restaurant, demanding that they stop the party," he told AFP.

The authorities, who have long tip-toed between secular constitutional ideals, the demands of a booming tourist industry and the wishes of conservative Muslims, never formally responded to Islamists.

But Zanzibar's information ministry this week ordered local state-run media not to give the event any coverage.

Few on Zanzibar are aware of Queen or Freddie Mercury, who was born Farrokh Bulsara on the main island of Unguja to Persian parents employed by the British colonial administration on September 5, 1946.

Earlier today, I left the following comment on Pim's Ghosts post about "Islam-mania" manifesting itself in the latest fashions:


The reason we decided to call this blog the Infidel Bloggers Alliance is because we believe we need to glory in our Infidel-ness. I, personally, am a Christian. Thus, I am considered by Muslims to be part of the "people of the book." I am entitled to special treatment by Muslims as a person of the Book. Technically, I am not an Infidel.


No one was a better Infidel than good old Freddie Mercury. My favorite Freddie Mercury moment was when he came out on stage at Live Aid (the rock n' roll benefit concert broadcast to over a billion people around the globe) and bent over and simulated opening open his butt cheeks for the whole world.

It was such a great way to say "Kiss my ass" to all the pomposity of the event, and to all those who he well knew hated Western Civilization anyway.

Um, Freddie was a Zoroastrian. Totally different thing. The line in Bicycle Race was meant tongue-in-cheek. He's comparing belief in Christ with believing in Peter Pan, Frankenstein, and Superman. Not that I mind, of course; those were his beliefs and he's entitled to them. I greatly admire his musicianship and his talent. And the fact that radical Muslims hate him is just fine and dandy with me. :-)

Anonymous,
Thanks for filling me in. Didn't know that. It did occur to me that the line was tongue in cheek. However, it also occurred to me that considering his background, the idea might have been a statement of clan. In other words, I am from the Christian faith, rather than the Muslim faith.

Know what I mean?

You seem to hate muslims more than they hate Freddy Mercury.

Besides thinking that christians are not "hedonists" strikes me as pretty naive.

Didn't Jesus think we all should love each other?

Sharia law stipulates Freddie Mercury would be stoned to death for the sin of being gay. They literally do this in Iran, Saudi Arabia, and Nigeria.

I think that is medieval and sick.

I do hate that. Don't you? Do you think Jesus would call us to love stuff like that?

ok,
So, we should nuke first, maybe quickly. If not, I think we just need to be nice to everyone, and have faith that decency will always prevail.

wow....It's sad that you've come to dedicate so much time to the hatred of a people you obviously know soooooooooo little about...this is actually pretty funny....I feel sorry for you...I really do...and well...you're kinda counter productive hun - you keep destroying the bridges and gaps everyone else is trying to build...and by the way, Jesus was our prophet, peace be upon him, We - Muslims are in fact both Christian and Jewish...you, I'm not so sure of. Jesus told us to love, Mohamad told us to accept and uphold peace when its given to us...and Moses told us how to live...I hope God forgives me for judging you soo harshly...but you really need to find a new hobby...(hopefully you've found one by now) - and you need to educate yourself....Muslims aren't your enemy, Ignorance is - that's what you need to fight. Good Luck and God Bless and guide you....

I'm Muslim and I love Freddie....he was very brilliant and so is Queen. There are different kinds of people in this world...no matter what your religion is, you are either a kind, loving and giving believer or you are not kind and loving. Religions have nothing truly to do with the evils behind the person you are...it's your surroundings and the evil things you are taught that make you cruel and the devil of course. Believing in God is supposed to be a positive thing in our lives. If we all followed our religions the way they were written in the Good Books there would be no crime in this world! No bombs, no rapes, no killings. If people only would do the right thing! Stop blaming religions for peoples shotty actions.

Brenda,
I agree with you.

The thing is, Islamic scripture really does call for gays, apostates and adulterers to be killed. And, there are very few Muslims in the world who are willing to condemn such outlandish ideas and certainly those that do do not have an organized political voice.

Anyway, you sound like a great person and I wish you many blessings in life.

If you think Islam scripture says that gays should be killed, then you don't know what you are talking about. It says that it is a sin to be gay. Islam doesn't tell us to hurt other people.

Qur'an 7:80:84 - for those who practice lusts on men in preference to women, we will rain stone on them (stoning gays) sounds like harming to me so I'll call bull shit on that & counter with Taqiyyah Tawriya Kitman Muruna orders to Lie & deceive in many ways .
Quran verses of violence see 8:33, 8:12, 3:151, 4:74, surah 9:41, Bukhari 52:220 these are just a couple of my head that sound like harm to me look them up because strike off their heads & strike off every fingertip might hurt a little or slain or murdered or crucified or hands & feet should be cut off on opposite sides sounds like harm to me should I go on (it is not spirital struggle ) how about rape, stoning, lashes, setting on fire, bombing, war, terror, sword, gun, khazouk (hot metal spike driven up anus) Khatna (female genital mutilation) clitectomy all harmful practices of the Qur'an ISLAM & terrorism.
So peaceful I think NOT & I guess you will use the 3rd rule of Jihad is always play victim, you ain't a victim either then Aqidah Islamic Creed is 'nothing can exist that is not Islamic' this is why they get offended by everything. This is shariah laws 1st rule/law.