Infidel Hunk of the Week 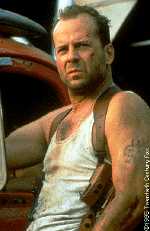 Actually, I've been kind of looking for an excuse to post a pic of Bruce Willis in this spot for a while. I know he's been a strong supporter of the GWOT, but this just fits perfectly. He has also signed along with current "Babe of the Week" Nicole Kidman (one of my favorites, too) in the ad against terrorism. So here's a nice Bruce pic, and yes, I prefer him kind of in his more scruffy roles. Though I must admit, seeing The Sixth Sense again after several years has really given me a renewed apreciation of his onscreen talent. He's just amazing. And a hunk. Oh yeah.
Posted by Kiddo at 5:36:00 pm