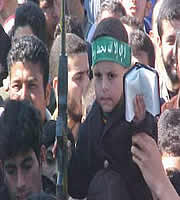 Just the names invoke a reflex of outrage that the United States would, according to the Muslims and their apologists, stoop so low as to do as much as harm one hair on the head of one poor jihadist who was captured trying to kill us.

Rage by Muslims who feel their religion offended. Rage by human rights fans who feel these inmates' rights trampled.

Rage by every Thomas, Richard, and Harold who has a column, a mic, or a blog.

But yet these same Muslims, you may as well say the same people as the inmates; just change the person in the scene, much like a position player in sports is just a position player, no matter who you put in the uniform at that spot, they all are expected to perform the same function. And the journalists; reporters for a "conservative" (Bush friendly) news outlet. Complete role reversal of Gitmo and Abu Ghraib. The inmates are the guards; the guards, inmates. The captives are mistreated, but all I hear is a scream of silence. No op-ed column of rage against this offense. No Amnesty International protest against the Palestinians. I don't know the background of these two, but for the sake of conversation, assume they're Christian - no sign-waving Christians flocking out into city squares to protest this high offense against their religion - the stripping away of their faith at gunpoint by savages.