Why the 'Islam' Reference in a Couture Op-Ed? 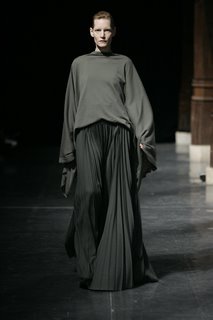 Ahh, late August, when the September issues of Vogue, Harper's Bazaar and their lesser competitors appear. I admit, I am a fashion magazine addict. I usually stick to the pictures and just skip the articles about just which outfits-I-can't-afford, especially as I'm never around the women who CAN afford this stuff. Now I know, you guys are thinking, Pim's Ghost, what the hell, you found something in a fashion magazine, and then took it seriously enough to write about? But bear with me.

So, I decided to read an article in this September's Bazaar about the over-sized, layered looks that have taken runways and magazines by storm, aptly titled "Could You Get a Date in These Clothes?". Written by long-time and older Glenn O'Brien, he laments the odd looks and their lack of sex appeal, noting quite rightly that "women don't dress for us; they dress for each other". I'll buy that. But what grabbed my attention, other than the clothing pictured, was his offhand references to Islam in the op-ed piece, pp. 307-308.

"Sure, for the uninitiated, leatherlike masks, burka headgear.....might seem outrageous." Now I took that as just mocking the goofiness of Couture shows, as O'Brien also mentions that they "wouldn't be shows without showmanship". Still, after a paragraph lamenting the Chloe collection resembling maternity wear, he continues to muse on what is behind these new trends.

"Another big trend: covered. Floor-length, chin-high clothes. Is it Islam-mania? The rash of interest in films about Elizabeth Regina? A tribute to the new Supreme Court?"

The man obviously has a sense of humor, but why an offhand use of a term, "Islam-mania", used just as casually as some writers throw around "Islamophobia"? I have yet to have heard of "Islam-mania", even from under my Islam-monitoring rock, except from the wackier articles presented by CAIR and the ISNA. But used casually in the fashion world? I must admit to being baffled.

Fashion cycles, it always does. I took these layered looks as a well-deserved homage to the early 80s and break from the class-less images of Paris Hilton and her ilk. Yet these new looks have taken an odd tinting to me now, especially after articles by Mark Steyn and Fjordman, among others, noting that European women are starting to wear clothing that is more "covering" and modest, even headscarves, to stem abuse in public by verbally abusive Muslim men. As Steyn noted in his "Happy Warrior" column in "National Review" only a few months ago, some of his European female friends were enjoying the change that they experienced in the attitude of Muslim men when they went out at night. They, over his objections, claimed to like being treated with "respect" instead of being called "whores" or threatened with attack.

So, now with these Couture sea-changes coming out of Paris, Milan and New York, are we just seeing a normal cycling of the fashion world, or is this an "Islam-mania" that hasn't reached our ears and just slipped out through O'Brien, or is this "Islam-mania" really just the typical appeasement of "dhimmi-mania"? I think we all have noted that phenomenon already. It just made me wonder. Quite a bit.
Posted by Kiddo at 4:13:00 pm

Why don't they get heterosexuals to pick models? That one looks like James Dean meets Nair.

I have a hard time believing Euroepeans are actually taking a liking to Islam. I think Islam-mania may be a reference to the zeitgeist of the fear-culture we live in. Fashion designers consider themselves to be artists (and they probably ought to think of themselves that way.) Artists pride themselves on the idea that they can channel the collective unconcious of the culture.

I think the term Islam-mania means he believes we are manic about Islam. Certainly, we are here at IBA, for instance. We focus on Islam incessantly. The reason for this is because it is dangerous, and, as such, we need to figure out what to do about it.

The problem I see here is that these clothes are exactly the wrong thing to do in response to Islam.

The reason we decided to call this blog the Infidel Bloggers Alliance is because we believe we need to glory in our Infidel-ness.

I, personally, am a Christian. Thus, I am considered by Muslims to be part of the "people of the book." I am entitled to special treatment by Muslims as a person of the Book. Technically, I am not an Infidel.

So, what I am saying is Paris Hilton, while she may be manipulative and shallow, is actually doing exactly what we ought to be doing as a culture. We ought to just be sticking our asses in their faces.

Are you ready, Pim?

So does this mean that back in the '60s when guys were making wise remarks about my miniskirts all I had to do to stop that was cover myself up from head to toe in a nice black burka?

As I recall, I took the more contrary course of learning some snappy comebacks, most of them in Spanish (I lived in New York).

Of course, the women in Europe may be dealing with something much more threatening than construction workers' catcalls. They aren't backing down in the face of harassment, they are retreating in the face of intimidation, violence, gang rapes. And by trying to put the best face on it they are reinforcing their own surrender by refusing to recognize it for what it is: dhimmitude. Would the Jews in 1938 have staged fashion shows featuring new and stylish ways to wear the yellow star?

Where have all the Oriana Fallaci's gone?

"Would the Jews in 1938 have staged fashion shows featuring new and stylish ways to wear the yellow star? "


Yes, you are kicking ass and taking names.

Damn, Pim's Ghost, I'd put that one on the front page if I were you.

I don't know, but it seems likely that in fashion as in so many business sectors, that clothes are built for the client. And haute couture is built for the very well-healed client who is willing to pay the price. So someone, with lots-o-bucks-to-spend, is willing to shell out for burka-style. I say that the shortest distance between any two points is a pretty straight line. If someone wants styles that lionize the dress of conservative Islamic women, it is likely Islamic or Islamized women - or their husbands.

Well, for me this issue wasn't so much some of the new looks ("tip: covered; showing skin is no longer in"), where plenty of designers are still featuring miniskirts to put the 60s Mods to shame while adding thick tights and platform heels. It was the casual reference to "Islam-mania" used as if this was a common idea that has been discussed at length already and is to be easily recognized by readers. That is why I included the page numbers, so that you can all read the rather short article and see this in context. Yellow cover, Gwyneth Paltrow featured. An easy read at the grocery or drugstore, if anyone feels like it.

Pastorius, never fear, I doubt that the more extreme features of runway shows will filter to every woman out there. They rarely do. Some are experimenting with spandex! Heehee! Of course thick tights and leggings are still de rigeur these days, but hey, it's for fall and winter. As for our asses, my alter ego on YouTube has stuck her ass in enough faces (well, maybe not enough to fully mock the YouTube chicks who are into that sort of videoblogging), but I must admit you have all seen me only in warm weather gear and I am practically allergic to heat. My taste swings to the rather modest wool obsessed world of Ralph Lauren when the weather turns and I tend to look more like a politician and less like a "Desperate Housewife".

Revere, I too learned the snappy comebacks or as I've aged simply a complete lack of caring if anyone is even saying anything. I just don't care what people think of me, to my peril in some cases, but oh well.

Seminarian, you're quite right, there is a rather big market to tap into here, especially if you've seen or read about all the wealthy women in Saudi obsessed with under-the-abaya fashion. It was really about the offhand comment in an otherwise typically vapid fashion op-ed.

Pim,
I really wish you would post your videos here more often. Everybody loves them.

By the way, did you see my post on Freddie Mercury. It is related to this one.

Pastorius, my videos? Hmm...I'll do a new one or something. They're pretty old and I figured I'd slow down the site and bore people to death. Besides I'm busy with my "African Sleeping Sickness" lately, unfortunately.

Great post on Freddie, BTW. I love it, and I had wondered where he was from. But you can't call me Pim, I am just his humble servant. He is the master. But you can call me Neo-Con Zionist Jew Bitch Whore!

Well, ok. You know that's my favorite little pet name for you anyway.

I read that same article, and immediately thought the same thing.