Comforting terror victims up in the north

I wish I could've posted this earlier. Israel at Level Ground talks about how he joined with some Chabad emmisaries who provided aid to residents of northern Israel with The Israel Home Front Fund.

Most amazing is the high spirits among some of the troops. They may have taken some serious injuries, but, as one of the soldiers who was interviewed by the Jerusalem Post indicates, he's not fazed by the attacks:

In the orthopedics ward of Haifa's Rambam Hospital Thursday, St.-Sgt. (res.) Harel Siyani was being visited by a group of teenagers, one of whom brought along a guitar to play songs to raise his spirits. The smile on his face was a relief to his mother, who sat besides his bed.

Siyani, wearing a T-shirt bearing the name and logo of his army unit, was enjoying the music. It was a far cry from last week, when he was flown by helicopter to the emergency room, wounded and in serious condition. Shortly before August 14, when the UN-brokered cease-fire went into effect, Siyani was wounded in both arms and his chest by shrapnel from an anti-tank rocket fired by Hizbullah fighters. He, along with other soldiers in his reserve Golani infantry reserve unit, were taking part in the IDF's operations aimed at reaching the Litani River.

"There is pain, but it's getting better," said Siyani, who lives in Rishon Lezion and is one of some 400 soldiers wounded in Lebanon, the majority of whom were brought to Rambam.

Though currently he can't use either arm, and has to be fed and otherwise cared for, Siyani was in a good mood. The fact that his comrades come to visit him every day helps motivate him to heal faster. And despite his wounds, there seem to be no regrets and no doubt in his mind about where he'd rather be right now.

"I love serving in the army," he says. "I hope to return as soon as I am better. I protected my land and my birthplace, and even with the injury, I'd do it all over again."

I congratulate every soldier of Israel who can show such courage.

Here's also one photo of some damage done in one of Acco's streets: 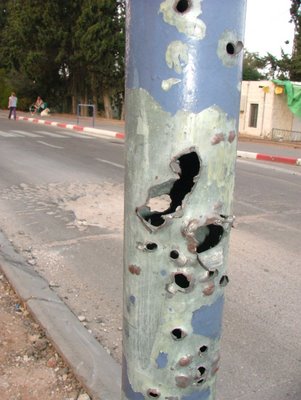 As many as 40,000 ball bearings slammed into the above street in Acco, and the sign pole seen here took a lot of damage too.