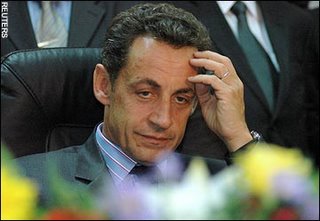 Nikolas Sarkozy looks as if he doesn't know what to do. Who can blame him?

Today's edition of the London Telegraph contains an article wherein the head of the Police Union in France declares,

"We are in a state of civil war, orchestrated by radical Islamists. This is not a question of urban violence any more, it is an intifada ..."

My friend Blueslord from Actual Jihad has translated an article from the French paper Le Figaro which indicates that this year police casualties will reach 15% of the total police force:

"Violent acts are rising in an exponential proportion", says a speaker from the Police. "If this tendency continues, we will have 15% of the policemen hurt in a year".

The casualty rate for the French police force will be over 3 times higher than that of the American military forces in Iraq. That is a stunning statistic.

It seems France really is at war, and thus far the French police are showing no signs that they intend to surrender, unlike the British police.
Posted by Pastorius at 10:37:00 pm

That was the sound of my jaw dropping. One of my younger brothers has lived in France for roughly the past twenty years. I wondered what had happened to his sanity - he had been a vegan Hindoo, now he's an anti-Semitic shite, and no longer welcome in my household.

I pretty much feel the same way about my European relatives.

My concerns are that my daughter lives in neighboring Belgium. The first I ever hear of her getting harmed by any Muslim is the day that I fly out there and take care of the Muslims with a hammer.

Well, perhaps it has truly begun after all.

Steve--were you speaking literally or figuratively about using a "hammer"? Just wondering. I didn't call my blog What Would Charles Martel Do? for nothing....

HOW DOES ONE SAY ARMY IN FRENCH?

That doesn't seem to work when they are in the West.