al_Sadr to be Dealt With "Privately" 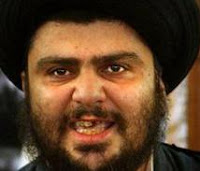 A relative of renegade Muqtada al-Sadr has indicated that the Sadar family of Iraq is planning to deal with the renegade rebel son as an internal family matter.

Alseyed Josef Alsadar a member of the honored Sadar family wrote a letter to Alrafedain news (Nida'a al Rafidain News) which said: "Muqtada al-Sadr has tainted the reputation of this respected family, and the family disowns Muqtada. We are as innocent of him as the wolf is of the blood of Josef (Biblical (Old Testament I believe) and Koranic reference). The family is working on ways to discipline him with in the family. Consultations for this are held at the highest level to come up with punishments for its rogue son.
_GatewayPundit

This statement from a senior member of the Sadar family comes as the rebel cleric al-Sadr threatens to unleash new violence upon Iraq in the coming days and weeks.

Sadr threatened to end the cease-fire after Iraqi troops took over the Mahdi Army-dominated neighborhood of Hayaniyah in Basrah and ejected the Sadrist political party from government-owned offices in the city. He openly said he was prepared to revolt against the government.

"Do you want a third uprising?” Sadr said, referring to the two Mahdi Army uprisings in Baghdad, Najaf, and the South in April and August 2006. "So I direct my last warning and speech to the Iraqi government to refrain and to take the path of peace and abandon violence against its people. If the government does not refrain and leash the militias that have penetrated it, we will announce an open war until liberation." __LongWarJournal

The rabble following of Sadr has stockpiled weapons for the threatened uprising across the Shia regions of Iraq, although one huge stockpile has been uncovered in Karbalah.

As more Iraqis grow weary of constant warfare and terrorist atrocities, the number of citizen reports to authorities of arms caches and gathering places for terrorists--both Shia and Sunni--are increasing.
Posted by al fin at 6:33:00 pm

However, we still have the problem that we helped create an Islamist government in Iraq.

How long before we are forced to overthrow that force?

At this point, most Iraqis appear to be antagonistic to both Al Qaeda and the Iranian backed Shia militias.

The middle east is a complex stew of explosive ingredients. Managing such a brewing cauldron requires a master chef. I am not certain where to find such a chef.