Photos Tell Of Gullible U.S. Representatives, Who Believed They Were Reasoning With Syria's Assad.

The other day I had the following conversation with a Jewish woman with whom I work.

Jewish Woman: The Israeli government and the Bush Administration cut off dialogue at the exact moment we ought to be talking.

Me: You mean like how Carter is over there negotiating with Hamas?

Me: The Hamas who would kill you because you are a Jew?

Jewish Woman: Yes, but if we don't talk with our enemies, how are we ever going to solve our differences.

Me: Would you have "talked" with Hitler.

Jewish Woman: Yes, because it wasn't just Hitler. There were other people around him. Maybe they would have wanted to settle the problems. If there is no talking, then then the only solution is violence.

Me: Well, when it came to the Nazis, violence was the solution. We destroyed their government, and ...

Jewish Woman: There's no talking with you. End of discussion.

Jewish Woman: We can go no further.


From the American Thinker:

These photos tell the story of misguided, naïve, and dangerously gullible U.S. representatives, who believed they were reasoning with Syria's tyrant Bashar Assad. 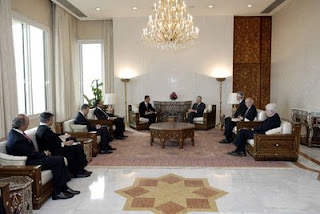 Brzezinski, "The U.S. and Syria have a shared interest in stability in the region" 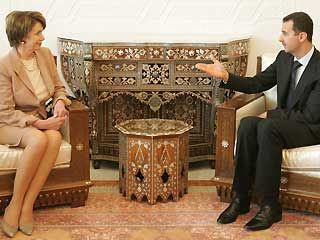 Pelosi, "Syria is willing to resume peace talks with Israel." 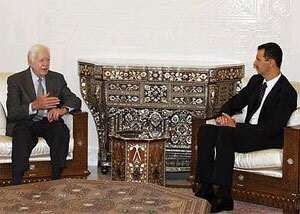 Carter: "In all my conversations with President Assad, whom I've known since he was a college student, I was impressed with [his] eagerness to complete the agreement on the Golan Heights. President Bashar Assad is eager to restart negotiations with Israel... "

What was Assad doing while his good American friends were engaging him in dialogues? What was going on behind those ornate walls while the well-meaning were eliciting the tyrant's point of view and hoping that American understanding will talk him out of supporting terrorism?

Satellite image by DigitalGlobe, 05 Aug 2007, of a suspected nuclear reactor site in Syria 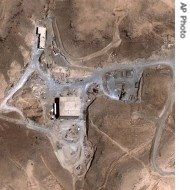 Will their be any consequence to their political standing for getting so much so wrong? Should an American president be equally disposed to dialogue with deceiving dictators, the consequences may be disastrous for the Middle East and the world.

I don't understand people like that. How could a Jewish woman not know the details of Hitler's anti-Semitism or ever believe that these "problems" could be "solved" by a friendly chat or two? Were any members of her family lost in the Holocaust? Could that have been prevented if the nations who formed the Allies had acted a few years sooner?

They must be a bit looser about the "modesty" issue in Syria, given how much hair and leg Pelosi is showing Assad.

I don't think the Jewish woman I'm talking about here did lose any family members in the Holocaust, but I don't think it would have mattered to her world view.

I don't think the Jewish woman I'm talking about here did lose any family members in the Holocaust, but I don't think it would have mattered to her world view.