Why Lord, Oh Why Did You Make The Jewish Girls So Hot? 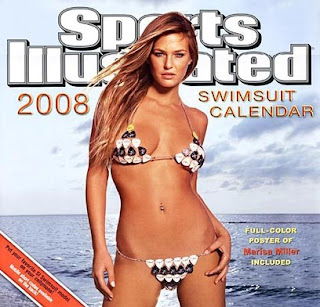 The Muslims don't know, but the Infidels understand.
It's enough to make a Muslim man "humiliate the Prophet."
From Ynet Lifestyle:

Dressed to kill
New immigrant to Israel tries to discover the secret of Israeli girls' hotness
Benji Lovitt
Shalom from Tel Aviv, English-speakers. Here in Israel, we’re preparing to kick off the celebration in honor of our first 60 years. This is the time to reflect on what this wonderful nation has offered the world: An inspiring story of national revival, innovative technology, great tourism, and of course, unprecedented Jewish hotness.
Holy cow…have you been to Tel Aviv? Here’s what I have to say about Israeli women:
“BUH-DAH-BUH-GOO-GOO!”
Look, people – there's no other way to say it: They’re hot. If this is news to you in the Diaspora, it’s time to visit (oh, and there’s that Kotel thing too).
When it comes to fashion and being “put together”, the women of Tel Aviv are without question as fashionable as those in any American or European city. Walk down the beautiful pedestrian boulevard of Rothschild and you’ll immediately know what I’m talking about. Imagine my surprise to learn that women dress for the office like they’re going out on the town. When I say “dressed to kill”, I’m not talking army uniforms.
Benji: “Hey, Dafna, what’s with the revealing outfit…hot date tonight?”
Sexy Jewess: “Ehhhhh….no. Shareholders' meeting. Why?”

Coming soon: The male evolvement With men, it’s a different story. I’m told the men here are pretty attractive as well, but as usual, they have some work to do to meet the standards set by the ladies. With warm weather quickly approaching, here’s a quick idiot’s guide to dressing like an Israeli male:
Step 1: Shave head.
Step 2: Grow 4 days’ worth of scruff. Not three. Not five. (Israeli men all possess the unique talent of always appearing like they just returned from their six month post-army hike in India. Man, they’re hot.)

Step 3: Put on at least one of the following articles of clothing:
• Baggy Thai fisherman’s pants (never, ever shorts) or tight European jeans
• Flip-flops
• T-shirt with English words which are inappropriate, make no sense, or are sexually suggestive. (Seriously, people here are obsessed with English and put on articles of clothing with a complete cluelessness about what they say. I saw a Russian grandmother wearing a shirt that said “Pimping Ain’t Easy”. Well, not with a walker it ain’t, grandma! These are your golden years! Take a load off!)
Step 4: Dressed? Great – I’ll see you at the beach. Or the office.
One great thing about living in Tel Aviv is that dress is so casual. I can’t even tell you the last time I wore a tie since moving here, if it’s even happened once. This makes for an interesting learning experience at your first Israeli wedding.
“Hey, who let the homeless guy in??? (Pause) Oh, that’s the groom??? How’s he gonna break the glass wearing Crocs?”
Okay, so maybe that’s a bit of a stretch, although I will say that it’s extremely hard to find a plain white dress-shirt that doesn’t have a dragon or some other design on the back. Future immigrants, bring white shirts with you. Forget the ties.

The secret: Mixing Now…you may have heard that high-tech is one of Israel’s biggest exports. What about its beauty? Heard of Bar Refaeli? Known by many as Leonardo DiCaprio’s girlfriend, she recently graced Sports Illustrated’s swimsuit issue. How about Galit Gutman, Esti Ginzburg, Moran Atias, or that Natalie actress girl? Did I mention my word limit? I’ll leave the Googling to you.

So why are Israelis so good-looking? In a word? Mixing. With immigrants from every corner of the world, Israel is a veritable genetics shmorgasbord of every kind of look and mix of cultures you can imagine.

Jews from Arab lands, the former Soviet Union, South America, Europe, etc. – the diversity in this country is simply unbelievable. I imagine Emeril from The Food Channel in the kitchen: "Two spoons of Ashkenazis...two spoons of Sephardis...a touch of Ethiopian...some olive oil...and BAM! Dizengoff Center!!!”
Jokes aside, I’ve always found myself attracted to Israelis and not because of what’s on the outside. Growing up in America, I always felt such a strong sense of pride, awe, and amazement towards my Israeli peers. While I spent my college years scarfing down pizzas, memorizing “SportsCenter” catchphrases (“Booyah!”), and generally acting like a doofus (what else is college for?), they were serving in the army and defending the state of Israel while speaking about it all matter-of-factly, as if this type of thing is completely normal and goes without saying (which it pretty much does in Israel).

For all these reasons, there’s just nothing more attractive to me than hearing someone speak Hebrew. You can have your Italian or South American accent…I’ll take the language of the Jews anytime.
Whatever beauty you’re looking for in a partner, this country has it, both inside and out.
Posted by Pastorius at 3:46:00 pm

That is one of the most beautiful women, I have ever seen. Our Islamist enemies don't appreciate beauty. Too bad for them. The Saudis would beat that girl to death for not wearing a burka, and they think we're the evil ones. They call us the great Satan.

The burqa is the chains of female slavery.

What Muslims do to women in the name of Sharia is absolutely unconscionable.

they are a slave. A person who has no choices in life - whose life is beholden to others who rule their will - is a slave.

That we tolerate slavery in our modern world is an abomination.

In the future, the history books will look back on this generation and ask what was wrong with us.

Your definitely correct. The burka is a symbol of evil. It just one of the reasons we should oppose Sharia. Never give these religious nut jobs any ground.

Thanks for linking to my article! For more laughs about this great country, feel free to stop over at www.whatwarzone.com.