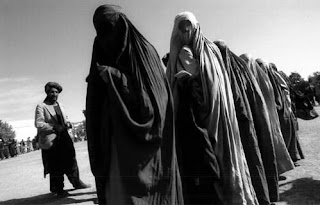 This is a major admission for a liberal "Human Rights" organization. I would go a step further and say that Saudi Arabian women are treated as SLAVES.
The fact that they don't have the right to make basic choices about education, whom to marry, when to leave the house, or what to wear, makes it clear; they are adults who are deprived of the freedom of choice.
That equals slavery in my book.
But, HRW is making progress, even if the Saudis are not (from the Guardian, via Jammie Wearing Fool):

Saudi Arabia's rigid sex segregation, compulsory male guardianship of women and other "grossly discriminatory" policies are a denial of fundamental rights, a leading human rights watchdog says today.
Women are treated like legal minors who have no authority over their lives or their children, finds a new report by Human Rights Watch.
The depth and detail of discrimination was laid bare in more than 100 interviews conducted during HRW's first fact-finding visit to the oil-rich, conservative kingdom, where King Abdullah is often described as a cautious reformist.
"The Saudi government sacrifices basic human rights to maintain male control over women," concluded Farida Deif, HRW researcher for the Middle East. "Saudi women won't make any progress until the government ends the abuses that stem from these misguided policies."
Every Saudi woman must have a male guardian, normally a father or a husband, who is tasked with making a range of critical decisions. And even when permission from a guardian is not mandatory some officials still ask for it "because current practice assumes women have no power to make their own decisions" over medical procedures or discharge from hospital.
Women are "marginalised almost to the point of total exclusion" from the country's workforce, the report says. And since Saudi women are banned from driving, a large proportion of their salaries goes on paying for transportation.

The burqa is the chains of modern slavery.

Each generation we choose not to do anything about this slavery, hundreds of millions of women pass their lives in enforced obscurity, their lives deleted by their male masters in the name of Allah.

Future generations will look back on our time and wonder, just as we do today about the leadup to the Holocaust, how is it we could have done nothing?
Posted by Pastorius at 2:53:00 am

Of course the lefties will say "It's their culture, leave them alone". That's where a lot of the problem lies. The world has gotten so PC, they are so afraid of offending, that nobody is willing to do anything.

Back in the Hitler days, people said what they thought. The truth wasn't buried. Yes, there were some problems caused by this. But look at the shit pc has caused.

People need to take off the blinders or there will be many more generations of human beings treated like trash.

I can't argue, the sooner we have the courage to stand up for the rights of women in the Arab world, the better. The Feminists care too much about fighting male "oppression" here to care about women in non western cultures. Women had it better in pre-nineteenth amendment America than they have it in Saudi Arabia today. Yet the feminists won't stand up for them. Conservatives are doing far more to fight for the rights of women and homosexuals
in the Arab than liberals.

As an ex-Democrat myself, I still find it hard to believe that it is the Republicans who are fighting these causes.

Being on the flip side now, I realize just how wrong the Democrats are. They marginalize people to keep them down. And it is the people who are down, who are their followers.

Those of us who rose up out of the gallows, moved to the other side.

I'm a lifelong registered Democrat. And, I am very sad, cuz I feel like my party betrayed me.

You and I have joined a growing club of people, who took off the dark glasses.

It could be another 10-20 years before our party forms.

But, you're right, we'll be the best ever.

This is a good post. I too ask where are the feminist are. Islam is an absolute movement of evil. They follow their father "Satan."

shame on you
islam is not movement of evil
try to understand Islam firstly
and then talk
we see refuge with Alaah from the evil of satan befor we start to do any thing in our life
Iam saudi girl and my religion give me all my rights as a female
and Ifeel that iam like a pearl
and my father is my hero ,,