Feeling an intense heat and seeing how his presidential bid slips away, B. Hussein Obama decided to do a major damage control and dump on his pastor and mentor of 20 years Rev. Wright by kind of condemning his hate-filled, racist and anti-American views.

"I am outraged by the comments that were made, and saddened over the spectacle that we saw yesterday," he said. "You know, I have been a member of Trinity United Church of Christ since 1992. I have known Reverend Wright for almost 20 years. The person I saw yesterday was not the person I met 20 years ago."

He means to tell us that he's been listening to Wright's hate speeches for 20 years but it is now that he finds all his statements outrageous. Sure, I'll buy that.

But it gets even more interesting, with Wright saying that Obama only distancing himself from him to fool the whitey.

At Tuesday's news conference, Obama explicitly rejected Wright's statements as "ridiculous." He said he was particularly angry that Wright suggested he was only distancing himself from the comments for political purposes.

"And if Reverend Wright thinks that is 'political posturing', as he put it, then he does not know me very well," he added. "And based on his remarks yesterday, I may not know him as well as I thought either."

And after making this strongly worded statement he added: 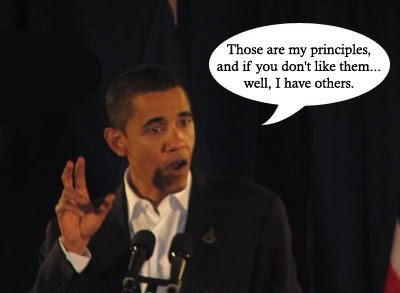 Crossposted at Eye On The World.
Posted by Watcher at 2:55:00 am

Now the question is whether those voters not consumed beyond reach of reason by their Obamassianism will recognize that Obama's responses to Wright's escalating public rants is a string of bald-faced lies and fact-dodging rhetoric. No one with any common sense who has observed the progress of this train wreck could honestly fall for this line of jive about not knowing what sort of unhinged racist rabble-rouser Wright has been for better than 20 years. That part of Obama's base comprised of the haters like Wright will be emboldened. Those like Dick Gregory and Sally Quinn (interviewed on the Imus program) who claim to "understand" Wright's pov have cast their lot with our enemies and nothing will change their attitudes. Those leftards consumed by BDS are unlikely to withdraw their support unless they become convinced Obama is on a losing course. The ones entranced by "Hope" and "Change" will resist abandoning the "dream" and continue to make excuses until the evidence becomes so overwhelming they are forced to do so or remain blindered all the way to the voting booths. The next few weeks will show whether there is still enough common sense and honesty on the Democratic side to step back from this precipice.

If they still vote him in after all this, I shudder to think what it will take to bring them to whatever senses they still possess.

And certainly not Senator Obama is appalled at what his spiritual advisor's spewing of his obsessive hate is doing to his campaign just when he thought he had it in the bag.

This will be a test of just how much of the voting public has acquired a healthy mistrust of the MSM.