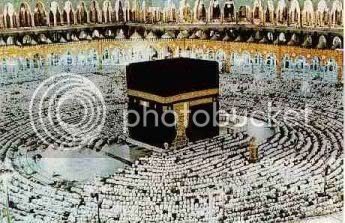 Photo of the Ka’aba in Makkah (Mecca) courtesy of Google Images
BBC: Muslim scientists and clerics have called for the adoption of Mecca time to replace GMT, arguing that the Saudi city is the true centre of the Earth.

Mecca is the direction all Muslims face when they perform their daily prayers.

The call was issued at a conference held in the Gulf state of Qatar under the title: Mecca, the Centre of the Earth, Theory and Practice.

One geologist argued that unlike other longitudes, Mecca's was in perfect alignment to magnetic north.

He said the English had imposed GMT on the rest of the world by force when Britain was a big colonial power, and it was about time that changed.

A prominent cleric, Sheikh Youssef al-Qaradawy, said modern science had at last provided evidence that Mecca was the true centre of the Earth; proof, he said, of the greatness of the Muslim "qibla" - the Arabic word for the direction Muslims turn to when they pray.

The meeting also reviewed what has been described as a Mecca watch, the brainchild of a French Muslim.

The watch is said to rotate anti-clockwise and is supposed to help Muslims determine the direction of Mecca from any point on Earth.

The meeting in Qatar is part of a popular trend in some Muslim societies of seeking to find Koranic precedents for modern science.

It is called "Ijaz al-Koran", which roughly translates as the "miraculous nature of the holy text".

The underlying belief is that scientific truths were also revealed in the Muslim holy book, and it is the work of scholars to unearth and publicise the textual evidence.

But the movement is not without its critics, who say that the notion that modern science was revealed in the Koran confuses spiritual truth, which is constant, and empirical truth, which depends on the state of science at any given point in time. [Source: Muslim Call to Adopt Mecca Time]

The Dawning of a New Dark Age (Paperback - UK)

The Dawning of a New Dark Age (Hardback - UK)

There CAN BE no difference between muslim scientists and clerics. The Quran is the newtonian physics and Schroedinger equation of god.

Otherwise it is apostasy.

Ah, the arrogance of Moslems.

If we call go by Makkah time, I suppose that all women will have to burqa up. Pfffft!

There's no end to the calls of Muslims to make Islam reign supreme over all of mankind!

I think they need to move their clocks GMT + 4 hours 17 minutes and 23 seconds. This way they can be even more out of touch with the rest of civilation. Next idea: a calender with all Mondays!

Haven't you got some damn good ideas, 'e of usa'?

Actually I think we should add pcp to the Islamist drug cocktail as well. They're like the worst of Christian fundamentalism on speed, steroids, and pcp!

Allah Pak says, due to the jealousy inside the mind, the jews, christians want how they can revert the Muslims, after having Iman and adopting Islam as religion, back to Kufri.

So, all Muslims should be careful of the misguiding attitude and conspiracy of the jews and christians and Mushrik/polytheists.