Ace's Manifesto: Why I Am So Absolutely Opposed to Marco Rubio 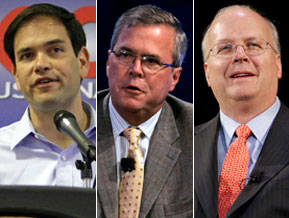 From the Ace of Spades Blog:


The Establishment has a gameplan. The gameplan is to manage their voters and leave them with little choice but to accept the agenda they've set for us.

Here is what they are hoping: "Sure, the base will squawk and make big noises and rant on the internet, and sure, Rush Limbaugh will hit us, but if we just remain absolutely implacable, unwilling to budge an inch, eventually they will get over their temper tantrum and accept that We Always Win So There's No Use Resisting."

Now, obviously, amnesty is a major part of the Establishment's platform. In their 2012 post-mortem, the consultants, who are super-smart and know everything, made amnesty a central plank to winning in 2016.

Now, if we all squawk, and make noise, and have our tantrum, but then, in the end,dutifully support an Amensty Super-Hawk like Marco Rubio, precisely as the Establishment always planned for us to do, do you think they'll take that as a repudiation, and a sign that they must reform?

Or do you think, rather, they'll take that as a sign that they calculated the political math perfectly, and they knew our numbers to three decimal places, and they did everything right, and have successfully Managed their stupid, three-toothed inbred voters yet again?Of course it's the latter.

Even if I lose the election, an even worse outcome would be if I lose, and they win.Again, you don't have to agree. We're Americans, we're permitted to think differently from each other.

But my priority is reforming the GOP into an institution which actually serves voters and not just the Chamber of Commerce and a dozen deep-pocketed, socially-liberal mega-donors, but a party that, when working class people tell them Disney is abusing the H-1B program to hire foreign workers and fire American ones, actually gives a shit, and does not just run over to Disney and ask for a campaign donation.

In fact, a CRTICALLY important read!

This is where we are folks. The GOP establishment has nothing but complete disdain for us and lives only to manipulate us to their own venal ends.

I'm glad you appreciate it.