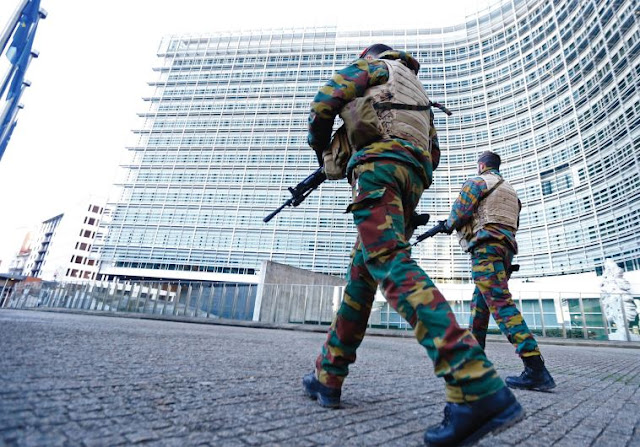 Europol: ISIS planning large scale attacks in Europe
“Islamic State has developed a new combat style capability to carry out a campaign of large-scale terrorist attacks on a global stage.”

BELGIAN SOLDIERS patrol outside European Commission headquarters in Brussels as police searched the area following the Paris terror attacks in mid-November that claimed the lives of 130 people. (photo credit:REUTERS)

ISIS has increased its ability to launch global terror attacks and plans to attempt more Paris-style attacks in Europe, the head of EU police agency Europol was quoted as saying by AFP on Monday.
Rob Wainwright told reporters that a new report by the agency shows “how the so-called Islamic State had developed a new combat style capability to carry out a campaign of large-scale terrorist attacks on a global stage, with a particular focus in Europe.”
Wainwright’s comments came a day after the media center of Islamic State purported to show images and last statements of nine of the people who took part in the Paris attacks that killed 130 people on Nov. 13.