The Lancaster Plan, or How I Learned to Stop Worrying and Love the Muslims 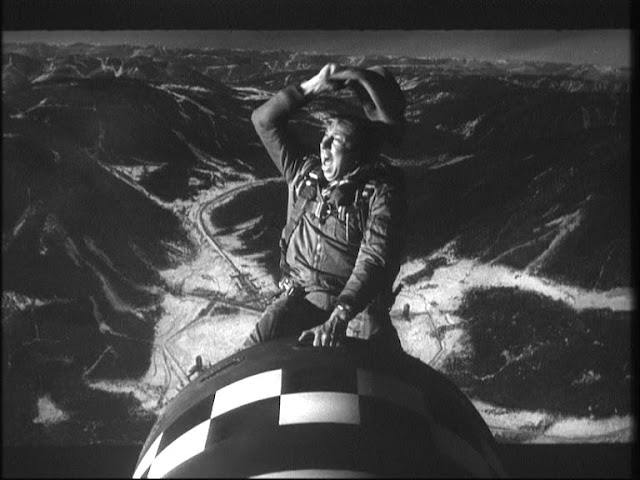 Blimey, I Seem to Find Myself Riding a Muslim, Chap


New English Review: The Lancaster Plan
Naturally, we were all most curious about this Lancaster Plan ... It was simple, he informed us. The Lancaster Plan contained several different provisions that could be brought into play to defuse the threat of Islamic violence in the U.K. That bald statement hardly satisfied us as an explanation. That fateful night we wanted to know what each provision was and how, and when, they would, or could, be activated.

What he said next left us somewhat bemused. He informed us, with no special tone in his voice, just in a matter-of-fact way, that the first two provisions of the Lancaster Plan had already been activated and were proving to be successful. Further provisions could be activated when necessary and in that way Muslim violence in Britain could be contained or minimised, or maybe even staved off indefinitely if the plan came to be implemented in its entirety.

Our interests were well and truly piqued and our curiosities well and truly whetted so we encouraged our informant to tell us more. He carefully explained to us the two stages that he’d just mentioned. The first stage was, so he said, the careful use of legislation to make any criticism of Islam, or Muslims, almost impossible. ...
The first stage of the Plan had been a success in that the Muslim population of the U.K. had taken full advantage of it to assert their uniqueness and to demand the respect that they felt was their due, the man said calmly. They were kept occupied and diverted by this and, as a consequence Muslim violence in Britain had been kept to a minimum – indeed, some Muslims felt, as this stage of the Plan, that so much progress could be made without their usual tool of violence that they even informed on those who were planning to perpetrate horrific acts on the streets of Britain. Viewed in those terms, the first stage of the Plan had to be considered a success.
(to be continued)
As you can imagine, I’m sure, we were not surprised by the fact of such manipulation – we were, and are, all aware just how successive U.K. governments have curtailed freedom of speech to the point where it no longer exists in Britain

Stage two, he informed us, had also been put into effect, but it was only an experiment in devolving power to small areas of the U.K. – Scotland, Wales and Northern Ireland (Ulster) – whilst still keeping the U.K. together as a type of politically whole unit. This was so that structures could be put in place to continuously manage that type of change. This would enable, he told us, the granting of some degree of autonomy, in an orderly and managed fashion, to various Muslim enclaves around the country when this became necessary. Precedents for devolution would have been established and the change could therefore be managed easily and without too much fuss from the general population. The whole Plan was really about managing the changes that the Muslims in the U.K. will keep demanding.

He went on to say that further stages of the Lancaster Plan envisaged granting these enclaves the right to implement their own laws, such as sharia law, granting Muslims the right to travel between these enclaves but remain subject only to the laws within them while so doing and expanding the enclaves as the need arose. The final stages of the Plan, he informed us casually, foresaw the need to alter the laws outwith the enclaves as they became bigger and more powerful in the national parliament – repealing such things as the laws that decriminalised homosexuality, the laws that granted equal rights to women and the laws that made all religions equal. The death penalty would have to be re-introduced and it would become necessary to assert in law the primacy of Islam and the superior position of Muslims in the U.K, but by the time that that would have to happen Muslims would constitute at least thirty percent, and more probably fifty percent, of the population. If the current government plans for the increased immigration of Muslims stayed on course then there should be no trouble in reaching that percentage in about fifteen years time, he told us. That would also ensure Britain having good links to the rest of the Islamic world through family and clan ties. The Plan was quite plain about the necessity of confusing and misdirecting the current population about immigration by distracting it with constant talk about refugees and overseas aid and other such trivia that could be magnified out of all proportion.

“You tweet too much” about refugees, the Dutch are told by police
Posted by Pastorius at 1:16:00 pm

Sounds like a plan to surrender if it's true. Is this a tongue in cheek?

I think it's tongue in cheek.

Nevertheless, it is EXACTLY the plan.

What might have been intended as tongue in cheek is instead the ugly reality of destroying Western civilization.

So sick of cataloging all this!

This comment by one Bishop Cardinal Guy Leven-Torres TOCC UK posted at Gates of Vienna introduced the topic of The Lancaster Plan: link
Quote: "Europe will be Islamic by 2023 if no rebellion ensues. The British Police are already receiving training to that effect. Local informant. This is the whole point of Sharia compliant hate law and diversity training and the ridiculous respect given to Moslems and their religious feelings.

In UK it is called the Lancaster (House) Plan. Yes it does exist but is being applied to all of Europe. I have been warning of these events for years but summarily dismissed a “loony”, even by fellows in the supposed “Counter Jihad”….

“Lancaster House” is used by British Government and FO to implement Lancaster House Plans in cases like Rhodesia and Mugabe, but also more recent events. The handover to India in 1947 was such a “Lancaster Plan (John of Gaunt), as was Northern Ireland and the devolution of independence to Scotland. Nobody wants to believe me despite 23 years researching the subject and ancient Medieval history (MA Hons) and Islam and holding an Honorary Doctorate in Divinity etc. Bat Ye’or is a postgrad like me of the same Dept at UCL London.

Both of us were dismissed as “unacademic” and conspiracy theorists, despite the obvious hard evidence. Personally I no longer care. (Well I do but what is the point when people will not listen)

Too late now though….Karma is a sob isn’t it?"

The Bishop is a regular at GoV - and his tone does not imply 'tongue-in-cheek' at all. That is why I searched the topic and posted the New English Review piece.