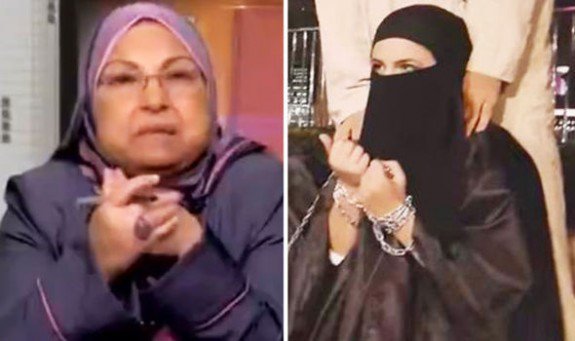 Associated with Al-Azhar Mosque in Islamic Cairo, it is Egypt's oldest degree-granting university and is renowned as "Sunni Islam’s most prestigious university"


AN ISLAMIC professor has allegedly claimed Muslim men are allowed by Allah to rape non-Muslim women in order to “humiliate” them. Professor Saud Saleh – from Al-Azhar University in Cairo, Egypt – reportedly said rape is allowed between times of “legitimate war” between Muslims and their enemies.

In a television interview Saleh appears to try to discourage the purchase of slaves from Asian countries for sex, claiming Allah has given Muslim men a “legitimate” way to have sexual relations with slave women.

The controversial professor allegedly said slavery existed before Islam and anyone could trade “freeborn men and women” but that Islam put slavery “into order” by regulating when it was allowed.

It is believed she claimed the only “legitimately owned slaves come from among prisoners from a war”.

I WONDER WHAT QUEEN RANIA HAS TO SAY ABOUT THIS.
Posted by Pastorius at 1:21:00 am

Yes, the remarks reflect Islamic Law. I have discussed this issue with a Mufti over coffee.

"Concubinage" (what we would term sex slavery and to put it more bluntly, rape) is allowed in time of war. There are rules which do regulate the slave trade of women as property, and varying on laws of supply and demand when women were taken as booty, the price could go up or down for women being bought and sold.

Troubling aspect? One fifth of the spoils of war belongs to Allah.

But then again, Allah keeps slaves. I am merely stating written text and verbal conversations regarding the status of the human race with regard to a god named Allah.

For those who believe that nine years is a marriage age, it places little girls in immense danger during times of Islamic conflict. That can also be taken as concubines.

For a bit more clarity regarding this issue:

I purchased the book. It was a poorly written autobiographical account of concubinage in the Sultanate of Brunei.

It must be remembered that whilst Ms. Lauren had adequate lodging, and was lavished with gifts in exchange for sex - the real concubinage in Islam is a transaction conducted between men. Once negotiated, the woman becomes the property of the owner. Her concubinage may include cooking and menial house chores, and cycles of violence.

We must reject the tenets of Islam because they are incompatible with democracy. Democracy seeks to restrain predatory practice of men against women.

I do not understand what you mean by Allah keeps slaves.

Could you tell me what happens to those girls?

In the day of a nascent Islamic state, 1/5 of the booty went to Muhammad, as the Messenger of Allah. The tradition continued along with the Four Caliph. It is a means of providing for leadership. Later evolved practices established a state treasury.

In the case of the Sunni, the laws regulating Zakat/Zakah (a word which means "grow" in Arabic) allow for the disbursement of the funds within eight separate categories. The Grand Ayatollah (about twenty living across the globe) also collect funds but the term is Khums (which means one-fifth) They have deputies across the globe and maintain bloody turf wars over their resources.

Regarding resources, complex laws exist on how the "wealth cleansing tax" (zakah/khums) is collected and involve such granular issues as whether land is hand irrigated or watered from existing springs. Different weights and measures for animals. Zakat is NOT collected on donkeys, because they are considered worthless beasts. smile

I always say Allah keeps slaves. It is not with malice. It is with an understanding that the only relationship noted between Allah and his creation is that of a master and a slave. So there is much angst, over doing the "will of Allah".

What happens to little girls who are sold and raped? I prefer not to describe the gynecological damage....

You write - "In the day of a nascent Islamic state, 1/5 of the booty went to Muhammad, as the Messenger of Allah. The tradition continued along with the Four Caliph. It is a means of providing for leadership. Later evolved practices established a state treasury."

I RESPOND - Yes, this is why I say that when schools serve Halal food it is a violation of Church and State. The reason is a portion of the money spent to buy the food is literally A TITHE TO RELIGIOUS INSTITUTIONS.

Additionally, I'm pretty sure some of that money goes to the Muslim world, so it is in effect the funding of Jihad too. It's a kind of money-laundering in reverse.

Have you ever written anything on this "wealth cleansing tax" and the Halal food scam?