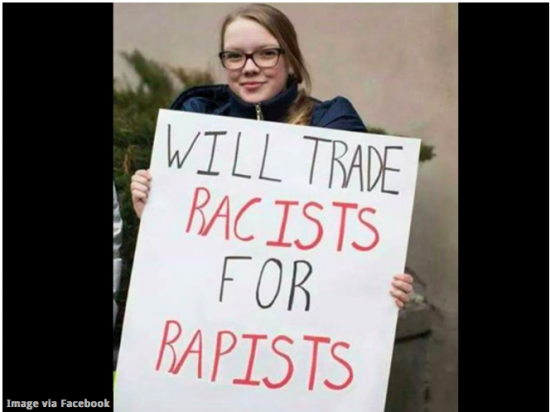 This Photo is a Fake


A Facebook page for the radical left in Germany had a message for young women: “diversity is more important than your security.”

Rote Antifa posted a picture of young feminist on Thursday, holding a sign that stated she preferred rapists from Syria and North Africa over nationalists in Germany who have demanded Chancellor Angela Merkel stop taking in more refugees.

“Prefer sexually active fugitive as German racists,” was featured as the pictures caption.

UPDATE - The photo above is a photoshop of this photo.

The story is probably true. But the photo accompanying the story is a photoshop.
Posted by Pastorius at 4:44:00 am

Might be a photoshop of this image: Will trade refugees for racists

I should have known. This story came from Shoebat.

another story from Shoebat worth considering...given he links to source this time: