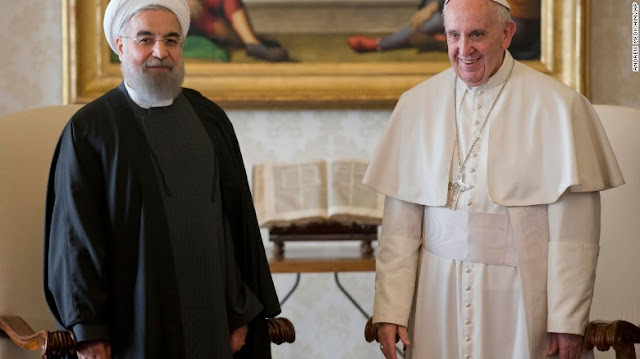 Hi, Look at Me, I'm a Total Fuckin' Pussy,
and I'm Standing Here Smiling,
With a Man Who Wants Me Dead

Is he out of his fucking mind?


(CNN)The leader of the Roman Catholic Church and the President of Iran met Tuesday at the Vatican, a face-to-face encounter that speaks to a changing geopolitical landscape and both men's significant role in it.

Cameras captured Pope Francis and President Hassan Rouhani shaking hands and sitting down across from each other.

The Vatican later offered a glimpse into what it called"cordial discussions" touching on the Islamic Republic of Iran's nuclear accord and "problems afflicting the Middle East."

While the Vatican news release didn't mention any specific group or country, no doubt the agenda included talk about the years-long war and humanitarian crisis in Syria and Christians endangered by Islamist extremists such as ISIS in that country, neighboring Iraq and elsewhere. "The parties highlighted the importance of inter-religious dialogue and the responsibility of religious communities in promoting reconciliation, tolerance and peace," the Vatican said.

The pair -- one a Muslim cleric, the other the world's most recognized Christian leader -- had planned to sit down in November, according to official Iranian and Vatican news outlets. But Rouhani postponed that meeting, and his entire trip to Europe, following that month's coordinated terrorist massacre in Paris.

They entered Tuesday's talks with high expectations at a time when Iran's role in global affairs has evolved considerably. Just last fall, Tehran was still subject to widespread sanctions over its nuclear program.

Those sanctions have recently been lifted as part of a deal that Rouhani championed, arguing since his 2013 election that it's in his nation's best interest to resolve the issue and become more involved in world economic and political affairs.

Prior to the sitdown, Italian Foreign Minister Paolo Gentiloni told CNN's Christiane Amanpour, "I think that the meeting of President Rouhani with the Pope is one of the signals of the fact that, after the nuclear deal, we have a possibility of a relevant involvement of Iran in a regional and global framework."

Syria war likely high on the agenda Economics played a big part in Rouhani's push for a nuclear accord, and in his European trip. To that end, before the Vatican meeting, Italian and Iranian officials signed billions of dollars in trade deals that Gentiloni says mark "a new era in economic relations."

It's highly unlikely, though, that business matters were high on the agenda for Pope Francis. Yet the Catholic leader has been a top worldwide figure on many issues -- leadership that led Time magazine to name him its 2013 Person of the Year -- that would be relevant in a sit-down with Rouhani, Syria likely foremost among them.

Francis has persistently called for peace and opposed widening military interventions in Syria, even making the message a focus of his first Christmas as Pope.

In response, and in apparent recognition of the Pope's high moral standing worldwide, embattled Syrian President Bashar al-Assad sent a message of appreciation for Francis' words and his support for a peaceful resolution "through national dialogue."

Yet little has changed since then in Syria.

QUITE FRANKLY, THE POPE IS LYING.

HE HAS NOT CONSISTENTLY CALLED FOR PEACE.

HE CALLED FOR MILITARY POWERS TO INTERVENE TO STOP THE GENOCIDE AGAINST CHRISTIANS.

BUT LIKE A FUCKING PUSSY, HE HAS TO ASK BIG STRONG MEN TO DO THE WORK FOR HIM.

AND HERE IS ISIS' RESPONSE.


ISIS To The Pope, "You And Whose Army, Pussy"

Rather than offending the host nation, Rouhani should be forced to borrow & don one of his wive's slitted veils and if necessary, the same blinders which calm the average savage beast during his visit with the pope

UKIndependent: Italy creating 'Italian Islam' by making new religion in line with 'Christian tradition' The interior minister announced the creation of an official 'Council of Relations with Italian Islam'

That should fix it! (/sarc)

Fitness center according to the feed at NBC ...Pt. Loma on lockdown
]For those reporting to Naval Base San Diego, firearms are not allowed on the base at any time.

Pasto, I'm not quite sure how you feel about the pope today.

Maybe you can be clearer

LEt's hear it for american students

That is an amazing story; one of those Godhead metaphors that ought to end up in the future Bible that tells the story of our times.

All Christian churches, and the Catholic Church in particular is guilty of hiding the true nature of Islam for more than a thousand years. Why not speak now? Why keep the pretense it's an "Abrahamic" religion, IT IS NOT. Why not talk openly as to who the Muslim Jesus is? And those two are just the beginning! Why are the Jews silent? Why not uncover Pandora's box once and for all? That ideology is destroying humanity, and the spiritual leaders, as well as the political leaders remain mum.