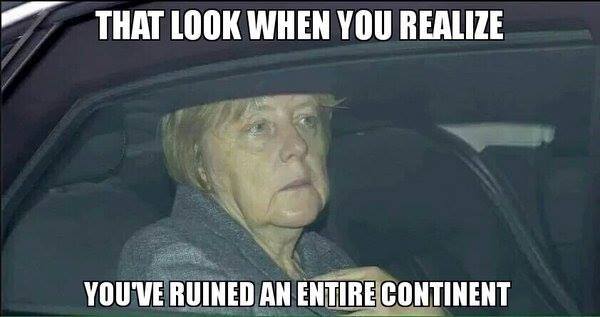 Will This Woman Just Die Already?

I don't know about you, but I truly hate Angela Merkel:


Chancellor Angela Merkel called for “intensive action” against anti-Semitism on Saturday, urging vigilance particularly when dealing with young people from countries “where hatred of Israel and anti-Semitism is widespread.”

"Anti-Semitism is more widespread than we imagined. And that is why we must act intensively against it,” Merkel, who on Monday will inaugurate an exhibition in Berlin titled “The Art of the Holocaust,” said in her weekly video podcast.

Some 1.1 million asylum seekers entered Germany in 2015, many of them fleeing war and persecution in Syria, Iraq or Afghanistan.

“We must take care, specifically also in youth (from) countries where hatred of Israel and Jews is widespread,” she insisted, without mentioning specific countries or refugees.

“We have observed in several schools and meeting places (anti-Semitic) events (led) by young people, against which every adult has to act,” she said. “We must also encourage students who think differently,” she stressed.

“We can try to reason (with them) again and again but it should also be clear: (Anti-Semitism) has no place in our society…we must simply put clear limits,” she said.

If you feel that way, then why did you import over 1 million of these scumpools in the past year?

The truth is, the German leadership has not ceased being anti-Jew.

They simply imported another population of people to do their dirty work for them.
Posted by Pastorius at 9:44:00 pm

How can a person Not realize how destructive to your society importing a million vermin who are not employable can be. How can a person not see that these vermin are savages?
Unreal. Merkel should be hanging from a tree in central Germany.