UPDATES WILL BE FROM THE TOP DOWN, OLDEST STUFF AT THE BOTTOM (mr)

19:30 EDT Truck was loaded with "arms and grenades"

19:20 EDT Trump press conference on VP tomorrow has been cancelled/postponed

18:50 EDT French Ministry says no hostages at this time

18:23 EDT -- Fox says Sky News reporting police believe an accomplice is on the run. Other news outlets (Daily Mail etc) saying an accomplice may have hostages at the Meridian Hotel and Buffalo Grill. Original truck driver emerged from cab shooting.

Fox TV is reporting a gunfight between responding police and the suspects (plural) ISIS has apparently claimed responsibility.

DEVELOPING: Dozens were killed Thursday after a large truck drove into a crowd of people who had gathered for a Bastille Day fireworks show in the southern French city of Nice, a regional official said.
Nice Mayor Christian Estrosi said on Twitter that there appeared to be "dozens" of fatalities, while the French TV channel BFM reported that at least 30 people had died. No casualty figures were immediately given by authorities.
The apparent attack happened at around 10:30 p.m. local time on the Promenade des Anglais, the city's main boulevard along the Mediterranean Sea.
The Nice-Matin newspaper quoted one of its reporters as saying the truck driver "mounted onto the Prom and he drove on everyone." The reporter added, "people are running, it's panic."
A photo taken by the reporter showed around a dozen people lying in the street, with some being tended to by emergency personnel.
Reports of shots being fired could not immediately be confirmed, and may have been confused with the sound of fireworks.
The paper posted an image of the truck on Twitter, captioning it, "The truck that drove into the crowd." 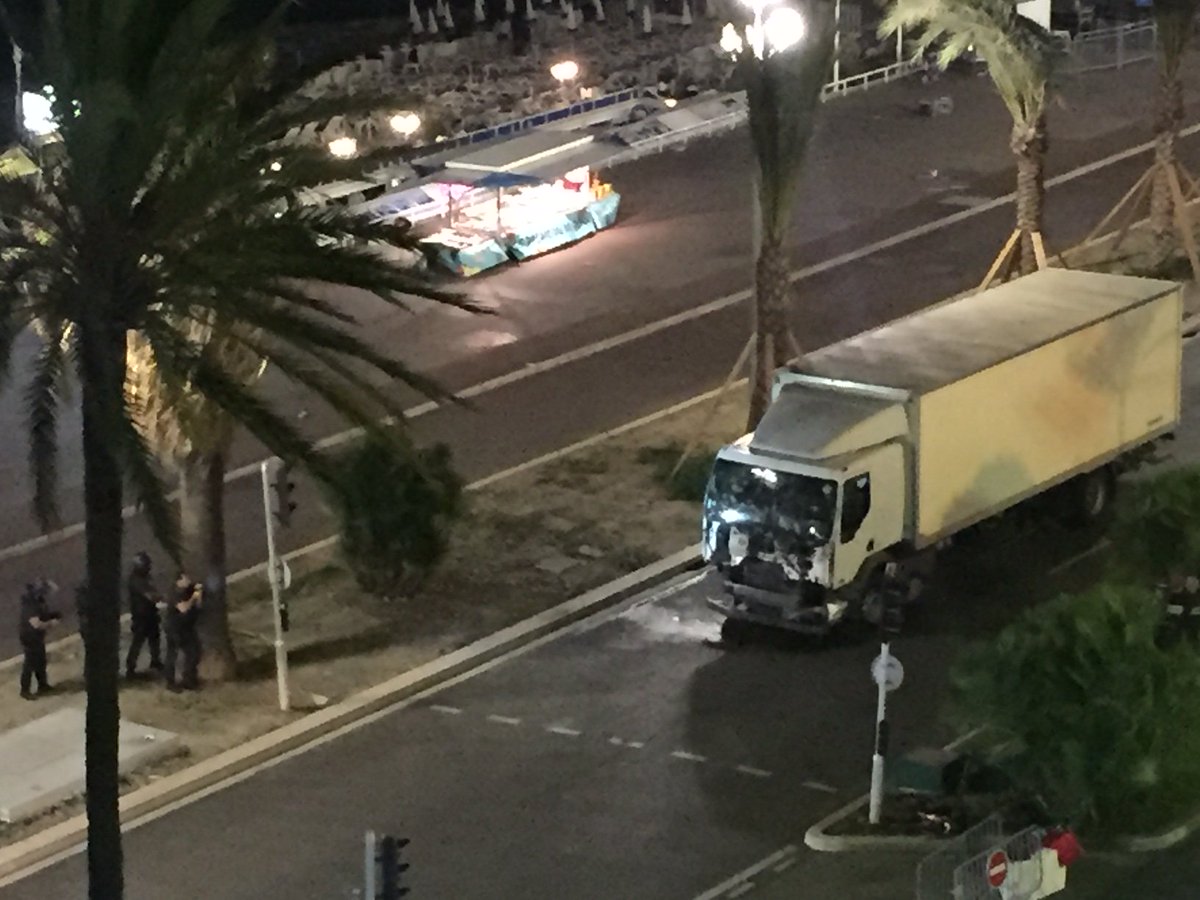 Not a lot of information about this out there but apparently up to 30 people have died (confirmed now by a French TV station).

Feel free to update this post or start a new one.
Posted by Nicoenarg at 10:53:00 pm

Thanx for the heads up Nico. We're on it now but please feel free to jump in and add to if you wish my friend.

If the truck was loaded with arms and grenades then ramming people with it makes no sense...unless the truck was supposed to deliver those to other terrorists who would have then carried out the attack.

Failing that, ramming people with it was probably plan B.

My theory is that the route that the truck was supposed to take was deemed to risky, plan A called off and plan B executed. "Lone Wolf" claims being thrown around all over again to protect Islam.

I wouldn't be surprised if there's a whole bunch of other terrorists who will carry out their attack another day while the French are probably going to be planning another march, hand in hand, showing what pussies they all are.

Yeah the arms and grenades thing doesn't make any sense for a lone wolf. It ain't, there's others and they will strike.

That's a really good point. I wonder if anyone else is making it.