How Did The Nice Attacker Get Through Security? 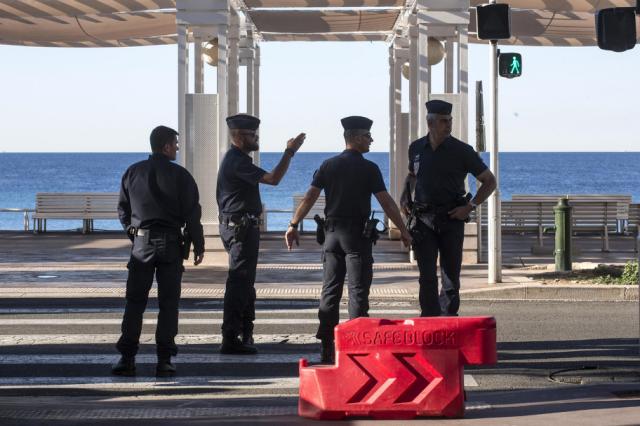 
This time, France was supposed to have been better prepared.

Despite a state of emergency following two recent terror attacks, authorities in France are facing criticism that they should have done more to protect one of the softest of soft targets: A pedestrian zone in Nice where 30,000 people — families and fun-seekers among them — turned out for Bastille Day celebrations that were turned to tragedy by a truck driver's deadly rampage.

More than 120 police officers and soldiers were deployed at the festivities, according to the Interior Ministry. But critics are saying that wasn't enough to protect the several miles-long stretch of the city's seaside Promenade des Anglais that had been closed to traffic.

During Thursday's fireworks display, the attacker was able to drive a 19-ton truck through police controls and barrel 2 kilometers (1.2 miles) through the crowd, killing 84 people, before being shot death by police.

Previous attacks in Paris, Brussels and beyond exposed France's and Europe's vulnerability to extremist attacks by affiliates and supporters of radical groups like Islamic State and al-Qaida.

Thursday's killing spree now underlined the difficulties of guarding against attacks when an everyday vehicle can be turned into a devastating weapon. "

Now is the time for mourning, but I sense that anger is growing," Christian Estrosi, the conservative president of the greater Nice region, told France Info radio.

Estrosi, a member of the opposition Republicans, said he had requested that the police presence be reinforced in Nice ahead of the fireworks display but was told there was no need. In an open letter published on the Nice

Interior Minister Bernard Cazeneuve said high security had been assured in the region, pointing to the Cannes Film Festival in May and the Nice Carnival in February.

Speaking to reporters Saturday, Cazeneuve said police vehicles were blocking the entrance to the promenade but the truck "forced its way through by mounting the sidewalk."

Streets shut down with barricades and heavy Police presence:

Just another of the minor inconveniences we put up with for the pleasure of living with all the Moderate Muslims who are our friends and neighbors.
Posted by Pastorius at 3:33:00 pm

He was stopped by police, but since he was "delivering ice cream" he was allowed to park for hours in the area before the attack. The truck WAS NOT INSPECTED. WHY?

In spite of the bloodshed, threats and suffering, nobody is really taking this seriously. They guy looked Middle Eastern, and the police did not want to offend him. We are doomed.

Did anyone else notice (I did when viewing the first image of the truck) that it was not refrigerated? Am I imagining this?! Did the police allow a non-refrigerated unit to deliver "ice cream"?

* If it had been a refrigerated unit the police could have loaded the 84 individuals who were killed into the back....

This begs the next question: Did the assassin have inside help?